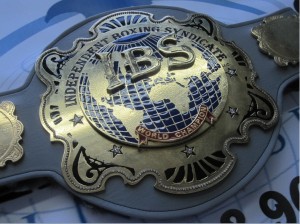 With four major sanctioning bodies in boxing and at least five smaller organizations circling the pack, it would seem that the last thing the sport needs is yet another alphabet gang on the scene.

However, David Gardner, a hardcore fight fan with ties to the sport in his past, felt that it was time to throw his hat in the ring.

Investing his own time and money to get things rolling, he hopes to turn The Independent Boxing Syndicate (IBS) into a viable alternative to the existing sanctioning bodies.

The Boxing Tribune sat with Gardner and picked his brain on a few pertinent issues (In the spirit of full disclosure, The Boxing Tribune currently provides The IBS with their Men’s Rankings, but is not contractually tied to the organization in any way):

The Boxing Tribune: The first question is the obvious one…why another sanctioning body?

David Gardner: Well, the way things are now, another one will never hurt, but might change things for the better.

BT: In what ways is the IBS different from the rest?

DG: Well, one champ per weight class. No fees from the fighters. Outsourced rankings, so no bias. We rank the other champions. And we are currently talking to the Retired Boxers Foundation to give a percentage of the sanctioning fees to them.

BT: So, if you’re not charging sanctioning fees from the fighters, where does the operating budget of the organization come from?

DG: The promoters…and its a very minimal amount just enough to cover costs – we never got into this to become rich off of the boxers. Right now, everything has been out of pocket.

BT: OK, so that leads to the next question…why did you decide to take the risk and enter the business?

DG: Maybe even if we are never taken seriously on the world level, we can open the boxers’ eyes to the corruption of the current sanctioning bodies. They have been getting rich off of the blood, sweat, and tears of the boxers and everyone involved in the sport.

BT: What kind of personal investment have you made to get the organization off the ground?

DG: You know, the usual – time and money.

BT: Tell us about your personal background in the sport.

DG: A long time ago, I helped Steve Witherspoon (Older brother to former heavyweight champ, Tim Witherspoon) train inner city kids and I had a few amateur and pro fights. Nothing great. Somebody has to be the stepping stone and the kids gotta eat.

BT: Boxing is often one big clique, a lot of “it’s not what you know, but who you know.” Do you think that’s going to hurt you in terms of getting exposure and being taken seriously by promoters–The fact that you’re pretty much an outsider?

DG: I’ve already experienced that, but it won’t stop us because we have a message. It will be heard. People want change and we’re it.

BT: How hard has it been to get a fight to sanction?

DG: Well, no promoters will even talk to us because we don’t have any champions, so it’s been real hard. I’ve spoken to several boxers and they are willing, but no promoters will give us the chance– but it will happen. It’s the boxers that need to take the first step and realize they don’t need to pay 3-5% of their money for a belt.

BT: Talking about fees…what kind of fees would you be charging?

DG: The list of sanctioning fees can be found on the IBS website. [As comparison] go to the IBO website and check public disclosures and you’ll see they charge the promoters and the fighters. The other sanctioning bodies charge much more.

BT: Right now the IBS is small, but will you have a hand in officiating and judging, to ensure overall quality?

DG: No. The local commission will govern the fight itself. We cover the championship. We are bound by the laws of the Association of Boxing Commissions and all their rules and procedures…with the other sanctioning bodies, they are not bound by those laws because they are based in foreign countries. They may recognize the Muhammad Ali act and others, but are not bound by it.

BT: So, what would you say is the main difference between the IBS and the rest? One thing you could point to and say, “Yeah, this is why we’re better!”

DG: We’re here for the fighters, not to fill our pockets.

BT: The Boxing Tribune is providing the men’s world rankings…why did you find it necessary to outsource the rankings?

DG: So there will be no bias. We will have no say in who fights for a title, unlike others who push fighters they like. Do I need to say more? If so, I will lay it all out.

BT: No, I think we can all come up with plenty examples of bias…so, what happens if the rankings say one thing and the fighters just don’t want to fight for your title?

DG: Then the title will stay vacant. We are not here for the money, so there’s no pressure to fill the titles

BT: What do you think will be the catalyst for growth? What do you need to start being taken into consideration by fans and fighters alike?

BT: It only takes one champion. Look at Larry Holmes in the 80’s. He gave up the WBC to carry the new IBF and it gained credibility, same can be said for the WBO. The WBA has no respect from the fans right now, just check any boxing forum.The 4 majors are recognized because the IBHOF (boxing hall of fame) recognizes them, other than that, who’s to say what is the legitimate title?

DG: Yes…and we will recognize the fighters.

BT: Let’s say you get big, as big or bigger than the rest…you’ll have to add staff and the business will expand…How can we be sure that the IBS wouldn’t degenerate into what the other sanctioning bodies have become?

DG: The overhead will stay low because we use our supervisors/representatives as contract workers. They get paid when they work, not by salary. We do not force the promoters to pay for our referees and judges

BT: So, there will be complete separation from your sanction and the refs/judges…but under the current system, the promoters pay the commission, which in turn pays the officials…right?

DG: Yes. They force the promoters to pay for their judges and referees in order to sanction the fight. We will not.

BT: And, unlike the current sanctioning bodies, you’ll let the local and state commissions have their independence without any input or pressure form the IBS?

DG: The only input will be about the championship. If it is a controversial decision or stoppage, we will mandate a rematch after an investigation.

BT: And what about a situation where a champion is named, but his #1 contender can’t be signed….or what if the champion, himself, refuses to fight the top contender?

DG: Champions must defend their title within 1 year against the top available contender, exceptions will be made for injuries and unification fights. If this cannot be accomplished, then they will forfeit the title, but that is not our goal. But I understand what you’re saying about fighters not wanting to fight good competition once they have a belt.

BT: So, there will be a mechanism by which you can strip or otherwise sanction an unwilling champion?

DG: Yes, we are a legal sanctioning organization and once the fighters and promoters sign the documents they are legally bound by our laws and regulations.

BT: Obviosly, the fans will be skeptical after so many years of corruption…why should they believe in you and the IBS?

BT: ok…one last thing…Fans will read this, but eventually believe when things start rolling…But there are a lot of active fighters out there who read this site…make your case to them. Why would it be in their interest to consider fighting under the sanction of the IBS?

DG: To all the fighters out there–Stop giving your money to somebody that only cares about the money, not you. They are only respected because they have been around longer. You make the championship not the organization. Look at what Floyd Mayweather did before he fought Shane Mosley- Did the fact that he refused to pay the sanctioning fee belittle the fight or his career or the recognition that he’s the best welterweight out there? It’s time for a change and it starts with the fighters and the IBS.

For more info about the title bout or the IBS, in general, visit: www.ibsboxing.com