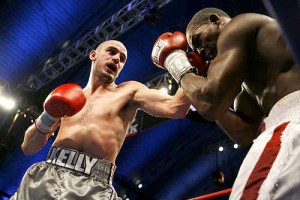 Not long ago, Pavlik was standing on top of the boxing world. He was the world’s best middleweight and lineal champion. He had legions of fans and admirers. Media attention was easy to come by. He was on his way from being a boxing star to being a superstar. In short, he was becoming America’s version of Manny Pacquiao.

But it all came crumbling down around him.

The year was 2008. Pavlik had just won the Ring Magazine middleweight championship of the world by vanquishing the previously undefeated Jermain Taylor in impressive fashion. He went on to win a return match with Taylor, then had a quick tune-up against Gary Lockett before signing to fight the legendary former middleweight king, Bernard Hopkins, at a catch weight of 170lbs.

This was supposed to be easy money for the younger champion- just another memorable win to bolster his increasingly impressive credentials.

What transpired that night in Atlantic City was memorable for Team Pavlik but for all the wrong reasons. Hopkins won almost every round en route to a blow-out victory over his younger foe. After the fight, Pavlik was sheepishly forced to admit at Hopkins’ suggestion that he should have stayed at middleweight instead of trying the move up in weight so soon.

So he went back down to middleweight.

The next year, Pavlik defended his crown twice against some decent, but unspectacular competition. Then in 2010 he signed to fight Sergio Martinez. Martinez, a southpaw, was just coming off a very close majority decision loss to Paul Williams. Pavlik was likely to win. Again.

It was a spirited contest, but in the end again it was Pavlk coming out with the loss. The ultra quick Martinez came out early and established a lead. The middle rounds saw Pavlk make some headway. He even scored a knockdown in round 7. But the last four rounds were all Martinez.

No longer the middleweight king, Kelly Pavlik is now reinventing himself as a super middleweight contender. Older now, Pavlik insists he can now focus on winning fights instead of making weight.

And he insists other distractions are gone as well.

Before defending against Martinez, Pavlik spent about two weeks in The Betty Ford Center fighting alcoholism. Later in the year, Pavlik re-entered the clinic, this time staying for two months. Released in January of 2011, Pavlik declared he was motivated and ready to fight again.

In a recent conference call, Pavlik addressed the matter.

“I got caught up in the partying part. When you get caught up in that, you’re going to have stress and unhappiness at home. I was caught up with everything involved and I had to make a change. If I can’t drink anymore, it’s not going to make me unhappy. We nipped it in the [bud] before it got too late.”

Focused and prepared, Kelly Pavlik is ready to start his climb to the top. Bob Arum, Pavlik’s promoter, believes his fighter’s best days are ahead.

“I think Kelly is a hero for overcoming this and a hero for even talking about it. Believe me, he’s going to end up bigger and better than he ever was. He’ll be a great example for so many people who suffer from addiction.”

As a promoter, Arum is required to say that kind of thing, but in this case it may very well ring true. Pavlik is a heavy handed competitor who has only lost to two very elite fighters. He was competitive against Martinez (arguably the best fighter in the world) and is only 29 years old. Relatively speaking, Pavlik is ready for the prime of his career.

And now it’s up to him to prove it.

Kelly Pavlik is scheduled to appear against the undefeated Alfonso Lopez (21-0-0) on the undercard of the Manny Pacquiao-Shane Mosley promotion. The event will take place 5/7/2011 at the MGM Grand in Las Vegas, NV and be shown live on Showtime PPV.