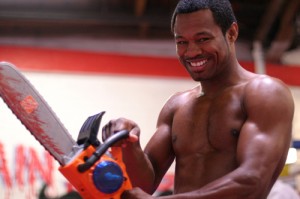 Welcome to the Monday Rant, the internet home for rabble-rousers, bomb-throwers, and people who are habitually addicted to the truth.

This will be the last Rant before the Pacquiao-Mosley bout next Saturday and, never one to sit on fences, I aim on putting my reputation on the line via bold prediction.

Flying in the face of all the experts and disregarding the mountains of well-reasoned analysis that picks Manny Pacquiao as a decisive and dominant winner, I’m picking the underdog and going with a Shane Mosley TKO victory.

Pacquiao is the -600 betting favorite, and rightfully so. He deserves to be regarded as the heavy favorite and Mosley, who is coming off of two consecutive woeful performances at 39 years of age, is the very definition of an underdog. Still, I’m picking the “over the hill” former three-division champ from Pomona, California.

Mosley is not the same fighter that he was a decade ago, when he first took the welterweight title from Oscar De la Hoya. He’s not even the same fighter who hung tough with a motivated, energized Miguel Cotto in 2007. On paper, he doesn’t belong in the ring with Manny Pacquiao. Yet, not only am I picking Mosley to win, but I’m also putting a few bucks on him as a +400 underdog.

Here’s my take on this fight. Feel free to torment and taunt me with my words if I turn out to be wrong:

A lot of what people see as special and almost super human about Pacquiao is due to very clever matchmaking.

Yes, Pacquiao is a great fighter– a once in a lifetime talent, but he has benefited greatly from being put in the ring with guys whose faults play perfectly into his strengths.

I have no reason to make any charges of PEDs use, but I do know that a smaller, southpaw, naturally quick fighter with a frenetic style will look super human against someone who struggles with footwork, balance and/or foot speed. For a guy like Pacquiao, the choice of bigger opposition actually works to his favor. All of his opponents, from David Diaz at lightweight to Antonio Margarito, have shared very similar characteristics– All were bigger opponents that just didn’t know how to fight like the bigger fighter and lacked the mobility to truly pursue a quick, unconventional fighter.

None of them could do anything but follow Pacquiao around and fire shots on the outside while Manny was allowed to dart in and out at will, conserving energy for sustained surges of offense whenever he felt like it. While you could look at this as a testament to Manny’s ability, you could also chalk it up to a list of opponents simply incapable of handling an unorthodox fighter not directly in front of them at all times.

Forget about the heavy cannons with Pacquiao, beating Manny has to happen from the waist down or from the neck up.

None of Pacquaio’s opponents above 130 lbs. were complete fighters, capable of forcing a real fight out of Manny and none were creative or skilled enough to alter their strategy when things began to go against them. It’s not a knock on the fighters, just an assertion that, stylistically, these guys were not a good match for the type of fighter Manny Pacquiao is.

Manny’s post 130 lb. career has been one of relative leisure. In all of his fights, he has controlled the tempo and pace, doing what he wanted and then moving off beyond his heavy-footed opponent’s reach. As someone with tremendous energy and mobility against fighters with little ability to handle those characteristics, Manny could do things and make mistakes against these bigger, slower guys that he couldn’t do against quicker or more technically well-rounded foes.

Forget how hard they could punch or how big they were, none could physically go after Manny and none were clever or astute enough to rough-up the Filipino sensation on the inside, making the naturally smaller fighter carry the heavy load of a grappling-minded brawler.

Simply put, Manny Pacquiao, since his climb in weight, has been able to dictate every aspect of the in-ring action and has never faced someone who could force him to deviate from the same basic game plan he has executed six times in a row. Except for a big body shot from Margarito that made him wince, Pacquiao has had a simple, stress-free road to three additional divisional titles.

As an opponent, Mosley seems to fit the bill of the typical Pacquiao opponent these days– old and coming off a big loss and/or horrible performance. But “Sugar” Shane stands out from the types of fighters that Manny has been fighting.

First, Mosley has a high boxing IQ and will actually have a game plan. Rest assured that trainer Naazim Richardson, who specializes in neutralizing opponents’ strengths, will have a few tricks up his sleeves and Mosley, after a lifetime in the ring, will, at the very least, have a back-up to fall back on.

Second, Mosley is adept at grappling and clinching, often drawing criticism for those fights where he elects to manufacture a grinding, bullish fight on the inside with strategic holding.

Third, at 147, “Sugar” Shane possesses more one-punch power than anyone Manny has ever faced. Mosley’s biggest punch is the straight right hand– the Achilles Heel of most southpaws. And not only can Mosley hit hard, but, unlike guys like Margarito, he works off of timing. If Mosley lands something big, he will hurt Pacquiao.

Finally, As a heavy favorite once again and ,after winning so easily in his other recent bouts, could it be possible that Pacquiao will be slightly flat going up against another major underdog? Team Pacquiao is already looking past Mosley and making an offer to Juan Manuel Marquez in October. For Shane this is a “must win.” For Manny, this is just another fight he should win fairly easily.

Mosley doesn’t have his legs under him and he won’t be able to compete in a war fought at a distance or at too fast of a pace, but he’s smart, multi-dimensional, and an accurate, ferocious closer.

If Mosley is able to grab Pacquiao and lean on him on the inside, wrapping his arms around Pacquiao’s until being forced apart, he will slowly ratchet down the pace. Well-timed feints as Pacquiao initiates his rushes from the outside, followed by a jab and strong straight right hand will keep Manny busy until Mosley can latch on again and wear down the smaller fighter. By the eighth round, Pacquiao’s energy will have dissipated and he’ll be forced into engaging more with Mosley. A less-than-energetic Pacquiao equals many counter-ready technical and exploitable mistakes.

A right hand will buzz Pacquiao late in the tenth and Mosley will put the finishing touches on the upset of the year. I will jump up and down, thinking of all the evil things I could do with my winnings.

Like I said, if I’m wrong, feel free to taunt me and laugh at the fact that I’ve squandered the grocery money. If I win, though, don’t expect to ever stop hearing about it.

By the way, I should also point out that I picked Pacquiao via easy win over Hatton, Cotto, Clottey, and Margarito. I also picked Mosley over Margarito.

You can email Paul at paulmagno@theboxingtribune.com, follow him on Twitter at www.twitter.com/boxing BTBC or check him out as he passive aggressively gets extra bread at every restaurant he eats at. Paul is a full member of the Burger King Kid’s Club.