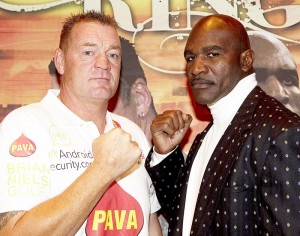 This Saturday, 48-year old, four-time world heavyweight champ, Evander Holyfield (43-10-2) is set to face Denmark’s former fringe contender, Brian Nielsen (64-2, 43 KOs), but his eyes are on a bigger prize than a win over the 46-year old Dane.

Holyfield, who is just two fights removed from a near win over 7 ft tall WBA heavyweight champ, Nikolai Valuev, has stated that he’d like one more chance at a fifth world title to become the oldest fighter to ever win the world heavyweight title.

”If I win, I am moving to the next level,” Holyfield told the Associated Press. ”I am hoping to get a championship bout with other guys with other belts.

In the meantime, though, is a money fight with Nielsen, a bout so poorly received that not even the spurious WBF sanctioning body would sanction it.

Nielsen, a 2001 Mike Tyson victim, has been inactive since a 2002 eight-round decision win over journeyman, Uriah Grant. Prior to that, the 6 ft 3 Dane is best known for a 1997 split decision win over Larry Holmes as well as victories over other faded former champs like Tony Tubbs and Tim Witherspoon.

Holyfield last saw action in January, suffering through a third-round no contest with journeyman, Sherman Williams when a cut over Holyfield’s left eye was ruled too severe to continue.