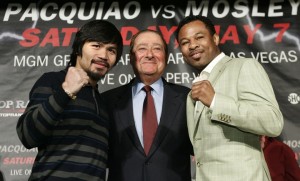 When navigating through the exploding sewage plant of boxing journalism, it’s hard to get a real perspective on what’s real and what’s made-up fantasy or paid-for promotional material.

The latest trash from the cyberspace junk heap involves a tale from an anonymous writer about an unnamed “former sparring partner of Manny Pacquiao” who says that he personally injected Pacquiao with steroids before bouts.

The lurid tale gained momentum when a bitter “Sugar” Shane Mosley and his new girlfriend, Bella Gonzalez, gave credence to the junk journalism by passing the word via Twitter.

To be completely upfront, this story is hardly new and someone came to The Boxing Tribune about a year ago with the exact same story. However, then, as is the case now, The Boxing Tribune is not interested in becoming a gossip column and doesn’t believe in burying a man, his legacy, and his reputation just for the sake of a headline and some traffic.

If this were a valid and legit story, a real boxing scribe would proudly put his name on the article, anonymous source or not. An unnamed writer citing an anonymous source is, simply put, a big, fat zero. This should be a no-brainer for even the most dogged of Pacquiao critics.

And this leads to the main point of this article.

As a reader and as someone who, presumably, wants the truth when looking for boxing news and info, there is one basic rule of thumb– Consider the source.

If any site or writer tries to push a story that cites an untrusted source or someone who has a vested interested in bearing false witness, then the story is probably a sham and the writer is either a poor excuse for a journalist or a shady individual trying to pull a fast one.

Things are especially dicey when it comes to stories about the sport’s two most divisive figures, Manny Pacquiao and Floyd Mayweather jr.

The boxing media is still writing stories about Mayweather demanding a $100 million for a Pacquiao fight and Pacquiao agreeing to random blood testing when the only source for both stories is Bob Arum, Pacquiao’s own promoter and heated rival / ex-promoter of Floyd Mayweather.

A Google search about pay-per-view buy rates for any Pacquiao fight will just as likely turn up Arum’s inflated estimate as the actual number.

There’s so much junk out there, it’s hard to get a clear idea of what’s really going on. What usually happens is that these questionable stories get passed around and re-printed so many times that they eventually become part of the dialogue– untrusted origin or not. But if fans just slow down, use their heads, and consider the source, it’s fairly easy to read between the lines.