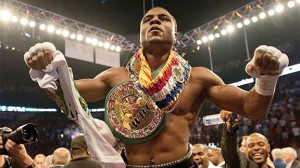 This upcoming May 21 is an unprecedented day in the history of the light heavyweight division as seven of the Top 20 175-pounders in the world are set to see action in four high profile contests.

Overall, twelve top light heavyweights (and two high profile division newcomers) will be featured over the span of thirty six days: May 21- June 25.

Here’s a look at the light heavyweight division and what’s in store for one of the sport’s historical glamor divisions:

The Boxing Tribune’s #1 ranked light heavyweight, Jean Pascal (26-1-1, 16 KOs) will put his WBC title on the line in a rematch of last December’s controversial draw with #4 ranked Bernard Hopkins (51-5-2, 32 KOs). At 46-years of age, Hopkins is attempting to become the oldest fighter to ever win a world title. Pascal, on the other hand, is fighting for respect and is looking to put on a show for his hometown fans in Quebec.

On the same card at the Bell Centre in Quebec, former champion Chad Dawson (29-1, 17 KOs) will get his chance to show off what he has learned under new trainer Emmanuel Steward and he’ll also get a chance to prove his alleged, new-found aggression against a fighter in Adrian Diaconu (27-2, 15 KOs), who knows no retreat. This winner between the #3 ranked Dawson and the #18 ranked Diaconu will go on to face the Pascal-Hopkins winner.

Former title challenger and #17 ranked light heavyweight, Viacheslav Uzelkov (23-1, 14 KOs) is due to be back in action May 28th in his native Ukraine against an opponent to be named later.

The following week, on the June 4th undercard of Carl Froch-Glen Johnson, undefeated Hungarian former world champion, Zsolt Erdei (32-0, 17 KOs) (#19 by The Boxing Tribune) gets back in action against faded former super middleweight champ, Byron Mitchell (28-7-1, 21 KOs). Erdei was a former WBO titlist who held the belt from 2004 to 2009, making eleven defenses before moving up in weight to take the WBC cruiserweight title. This will only be Erdei’s second fight in about twenty months.

On that same card at the Boardwalk Hall in Atlantic City, New Jersey, two former super middleweight world title challengers, Edison Miranda and Allan Green, will make their light heavyweight debuts against opponents to be named.

On June 25th, Tavoris Cloud (22-0, 18 KOs) (#3 by The Boxing Tribune) will be looking to make the third defense of his IBF title by turning back the challenge of #7 ranked Yusaf Mack (29-3-2, 17 KOs) in St. Louis on the Devon Alexander-Lucas Matthysse undercard.