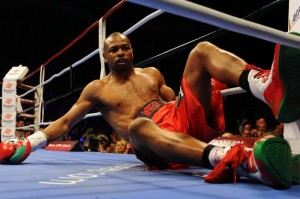 Whether you loved him or hated him, Roy Jones Jr. was once the most athletically gifted boxer of this era, and possibly of all time. His unique blend of hand speed, reflexes, power, and foot speed made him unbeatable for over a decade. Aside from a disqualification loss in 1997, where Jones hit a downed Montell Griffin, he did not lose until his May 2004 rematch with Antonio Tarver. Jones suffered a scary knockout loss, the first knockout loss of his career.

A big left hook sent Jones crashing down onto his back. He struggled to make it to his feet, but his senses weren’t there for him. Referee Jay Nady saved a wobbled Jones from further punishment, as he called off the fight in the 2nd round of a scheduled 12 rounder.

Just 5 months later, Jones was back in the ring challenging for Glen Johnson’s IBF light heavyweight crown. After 8 lethargic rounds dominated by Glenn Johnson, Jones was hit with a thudding overhand right followed by a short left hook. He went down hard, his head bouncing off the canvas as he landed. As the referee counted to 10, Jones lifted his head, but his body would muster little more than a faint twitch.

HBO’s Larry Merchant asked, “will we ever see Roy Jones in the ring again?”

Broadcast partner Jim Lampley replied,” Not the one you’re used to seeing, because you didn’t see him tonight. You saw the guy who got knocked out by Tarver, getting knocked out by Glen Johnson.”

The knockout loss to Johnson would have been the logical exit point for Jones. It wasn’t, unfortunately. After more than a year out of action, Jones would return to the ring for a rubber match against Tarver. Jones managed to last the full 12 rounds in losing an uninspired performance to Tarver.

For 3 straight fights we saw the erosion of Roy Jones Jr. The beginning of the end came after his 12-round unanimous decision victory over John Ruiz for the WBA heavyweight title. Jones’ sluggish and controversial majority decision victory over Tarver, followed by the consecutive knockout losses left his future clouded in doubt. The rubber match with Tarver sealed the deal.

Regrettably, and at the peril of Roy Jones Jr., it drags on.

It has been 5-and-a-half years since Jones’ unanimous decision loss to Tarver in the rubber match of their lopsided rivalry. In between embarrassing defeats to Bernard Hopkins (UD12), Danny Green (TKO1), and Joe Calzaghe (UD12), Jones built a house of cards on the names of fringe contenders and obscure title belts to add to his collection. Prince Badi Ajamu, Anthony Hanshaw, Omar Sheika, a shot Jeff Lacy, and a blown up-past his prime Felix Trinidad have provided stationary targets for Jones to temporarily rebuild his confidence, only to work his way back to catapulting the career of another contender on the cusp.

When Roy Jones Jr. steps through the ropes at the Sport Complex Krylatskoe in Moscow, Russia, he will be a stepping stone to bigger and better opportunities in the career of Denis Lebedev.

The Roy Jones of old is gone. The Roy Jones that would have stuck his chin out for Lebedev to flail at clumsily, only to dodge the punch and return 3 counter left hooks isn’t coming through the door any time soon. We are stuck with a Roy Jones who is flat-footed and unwilling to open up offensively. When pressed, Jones lays on the ropes and covers up behind his gloves, a tired tactic that proved fatal against Danny Green, who was able to sneak a right hand past Jones’ guard and send him to the canvas. His punch resistance has been reduced to dangerous levels, and the heavy-handed Denis Lebedev should be at the bottom of the list of potential cruiserweight opponents for Jones.

That is the reality; a reality that everyone not named Roy Levesta Jones Jr. has come to accept. To observers, the decline of Roy Jones is as clear as an undisturbed lake. Like many legends that came before him, and many that will certainly follow in his footsteps, Jones is unwilling to accept his decline and move on to a less dangerous endeavor.

Sadly, this unwillingness to let go of a life that can be so cruel is not uncommon. Most boxers have trained since childhood, through their teenage years, and have competed into their 30’s and 40’s. This life is all they know. A victory lap, or farewell fight can be appropriate under the right terms. In the case of Roy Jones Jr., his insistence to continue walking the line, his inability to walk away, may one day lead to his being carried away.