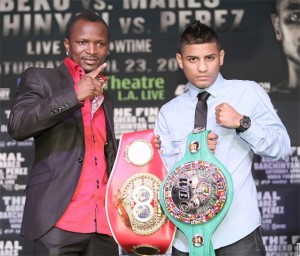 The finals of Showtime’s bantamweight tournament between Joseph Agbeko (28-2, 22 KOs) and Abner Mares (21-0-1, 13 KOs) have been officially rescheduled for August 13 at a venue to be determined.

The bout was originally scheduled to take place in April, but had to postponed after Agbeko suffered a back injury.

In Agbeko’s last fight, the tournament semi-finals, the native of Ghana put on a boxing clinic against Yonnhy Perez, winning a wide, unanimous decision. Agbeko also re-captured the IBF bantamweight title in this contest to begin his second reign as title holder.

Mares, on his part, took a split decision over Vic Darchinyan to get to the finals.

Agbeko-Mares will be aired on Showtime.