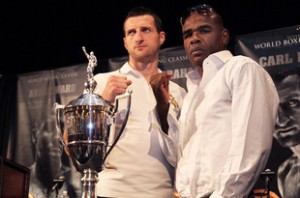 Carl “The Cobra” Froch (27-1, 20 KO) and Glen “Road Warrior” Johnson (51-14-2, 35 KO) will square off in the ring on Saturday June 4, from the Adrian Phillips Ballroom at the Boardwalk Hall in Atlantic City, New Jersey. Showtime Championship Boxing will televise this 12-round super middleweight bout beginning at 9pm EST/6pm PST. Froch’s WBC super middleweight title will be on the line, with the winner also earning the right to face Andre Ward in the final round of Showtime’s Super Six World Boxing Classic.

Glen Johnson joined the tournament in Group Stage 3, and was the injury replacement for Mikkel Kessler. After a long light heavyweight run filled with grand triumphs and uneasy defeats, Johnson has earned a new lease on his career as a super middleweight, a weight that he had not fought at in over a decade. Johnson knocked Allen Green out in the 8th round of their November 6 Group Stage 3 bout, earning his place in the semifinal round.

Carl Froch came into the tournament as one of the overlooked competitors. Froch pulled out a sloppy split decision win over Andre Dirrell in the tournament’s opening round. In Group Stage 2, Froch held up his end of the deal in a thrilling 12-round slugfest with Mikkel Kessler, resulting in a close loss for the Nottingham native. In Group Stage 3, Froch pitched a shutout over former tournament favorite Arthur Abraham, earning his place in the semifinals.