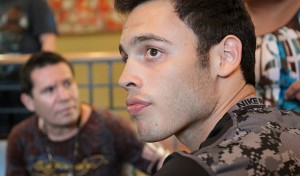 Hunger has been the key word in the lead-up to Julio Cesar Chavez Jr.’s WBC middleweight title fight with Germany’s Sebastian Zbik. The word has been press released and passed along by Chavez promoter, Top Rank, so often that the weaker-willed members of the media have begun to embrace it, like it was something more than typical publicist-driven hype used to promote an upcoming fight.

One can’t blame him for trying to hype his son’s fight, but Chavez Sr. has to be well aware of the difference between real hunger and what’s being press released to the media in this case.

Brought up in an abandoned railroad boxcar with his nine brothers and sisters in Obregon, Sonora, Mexico, the elder Chavez clawed his way to the top of the boxing food chain, motivated by hunger and the burning desire to pull his family from the smothering grip of poverty. Every win, every title pushed him to succeed more. As anyone who has grown up in poverty can attest to, the gnawing hunger never really goes away and it was this burning anxiety that forced Chavez to fight like a man possessed for the vast majority of his career, even after he had become a world famous prizefighting millionaire.

In contrast, Julio Cesar Chavez Jr. was born into wealth and into a fame that opened doors and allowed for easy friendships. His father was already super featherweight champ when Jr. was born and the only real hardship faced in his formative teen years was from the widely-reported affair his father allegedly had with Mexican actress, Salma Hayek.

Paraded to the ring for Dad’s TV fights and forced into child boxing exhibitions at local cards in Culiacan for his father’s legion of hangers on, boxing was thrust upon the son of the legend. Julio Jr. was used as an accessory to his father’s greatness and the quiet boy, who family friends thought to be too sensitive and introverted to be a fighter, had no choice but to choose boxing. At 17 years of age, Jr. succumbed to destiny and launched his pro career.

While he did show some aptitude and natural ability as a fighter, he would rebel against his pre-ordained life path by disappearing into the comfort of swanky Mexican night clubs, populated by his unique peer group of rich kid fun-seekers. He would also find solace in food, often ballooning up, 30+ pounds over his optimal weight.

Stories of Jr’s disappearances from training camp are legendary in Mexico and a constant source of frustration for a father who was not only living through his son, but also desperately using the second generation fighter as a way to remain relevant and vital among the Mexican people who once revered him. And, perhaps more importantly, the heir to the Chavez throne was also a way for Dad to pay off personal debt, estimated in the millions, that threatened to push the former champion back into the hole of desperate poverty.

With real and pressing financial problems, the former three-division champ was dealing with two fighting sons (Omar Chavez would make his pro debut three years after Julio Jr.) who were following in his footsteps, but who seemed to take their career development lightly, not fully devoted to anything but the celebrity status of being the sons of a legend. To the father, boxing was life and death, to the sons, boxing was a “cool” thing they did in order to get on TV and impress girls.

As his pro career rolled along, Jr. set off on a torrid pace of fights, using his father’s name and his Top Rank affiliation to get on the undercard of major shows. He got tons of TV exposure on some of the biggest cards in recent memory and headlined smaller Latin Fury pay-per-view cards while beating up on opponents who were, to be kind, several notches below journeymen and more along the line of what you’d find in Toughman contests. Yet the Chavez Jr. train kept rolling, sometimes once a month and never against anyone with even the most remote chance of beating him.

Chavez parlayed his sons’ success into a return of sorts to the forefront of the sport’s collective unconscious. The Chavez Bros. circus rolled through American cities with heavy Mexican populations and into Mexican cities eager to host a major prize fight. Most came to see Chavez Sr. and only superficially cared about the next generation stars that those behind the scenes were so desperately trying to market.

Meanwhile, with the steady stream of undersized club fighters being fed to him, Jr. began to atrophy as a fighter and even regress. His defense, never a strong suit, began to consist of just walking through opponents’ punches. He was being matched up with light-hitting, crude, arm-punchers who wouldn’t be able to hurt him under any circumstances and Jr. was performing accordingly, not even pretending to respect his opposition.

But, as is the case with most side shows, the act got old. Rather than follow the progress of a young star-in-the-making, the hardcore Mexican fan base began to roll their eyes and doubt whether Jr. would ever get in the ring against someone with a pulse.

In Monterrey, after his 2005 bout with Carlos Molina was controversially ruled a draw, fans booed the decision mercilessly.

Three years later, In Hermosilla, fans turned riotous after Chavez Jr. was declared the split decision winner in his controversial battle with Minnesota club fighter, Matt Vanda. The ring was showered with beer and debris from all parts of the arena while Chavez Sr. physically battled with several disgruntled fans who shouted “Fraud!” from the crowd. Meanwhile, Julio Jr., dejected and deflated, sat in his corner, protected with towels by his corner men and gave a heartfelt post-fight interview about not ever wanting to fight again.

But boxing was all Jr. knew and there was money still on the table, so he fought on.

About 16 months after the Vanda controversy, Jr. would find himself in deep water once again, fined $10,000 and suspended for seven months by the Nevada State Athletic Commission after testing positive for the diuretic, furosemide prior to his bout with Troy Rowland.

The Top Rank publicity following his suspension was centered around Chavez Jr. having learned his lesson, growing mature as a man, and wanting to prove his legitimacy to all the critics. Jr. added trainer Freddie Roach and, in the biggest and most impressive win of his career, bested Ireland’s John Duddy at the Alamodome in San Antonio, Texas.

A fight with journeyman trial horse, Billy Lyell followed, but so did the rumors of Jr. skipping out on training and ballooning up in weight.

Now, thanks to some characteristically shady slight of hand from Jose Sulaiman of the WBC in stripping real middleweight champ, Sergio Martinez, Chavez Jr. gets to fight appointed belt holder, Sebastian Zbik for the title.

The 29-year-old Zbik is a painfully orthodox fighter with little power and an often robotic mindset. Hardly a world beater, the German still represents the best all-around fighter on Jr.’s resume. And Jr., for all his mental and technical flaws, is probably the best fighter on Zbik’s resume as well.

Saturday night, Julio Cesar Chavez Jr. gets his first HBO date and, for what its worth, his first world title shot. Whether he’s “hungry” or not is pretty much irrelevant, though. With the WBC and Top Rank ready to write the next chapter in the Chavez legend and with a limited opponent in front of him, Jr. needs only be slightly peckish to pull off the win.

The real question is, what next? Will it be onward and upward for the second-generation star, a re-birth and second chance at making his career legitimate or will we see the implosion of a frustrated, confused kid who was pushed into something he never really wanted?