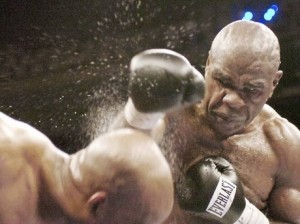 Glen Johnson, at 42 years old, is coming to the end of a long and winding road.  In his career, “The Road Warrior” fought some of the best fighters of his generation, lost some heartbreaking (and often unwarranted) decisions, and had huge championship-level wins.  He was even named the BWAA Fighter of the Year in 2004.

Not bad for a guy with 14 losses, 2 draws and only a handful of fans.

Johnson is one of the truly special fighters though, not because of his otherworldly talent or skill, but because he’s an everyman.  He’s a regular guy –not an athletic super freak.  Johnson is a workhorse with limited skills, a good chin and a can-do attitude.   And he’s often the underdog.

This Saturday is no different.  Johnson comes into Showtime’s Super Six Tournament, designed to crown the Super Middleweight Champion of the World, as an injury replacement for one of the tournaments early favorites, Mikkel Kessler.  After knocking out fellow injury replacement entrant Allan Green, Johnson earned enough points in the tournament’s format to fight for a shot at the title.

And Glen Johnson knows there’s no time to lose.

“I definitely feel a little bit of urgency for this fight,” Johnson said. “I’m not getting any younger…I know there are people still skeptical about what I can do at my age, but I actually get excited when people mention it and focus on my age. That means they’re not focused on my skills and what I bring to the table.”

Johnson admires another fighter facing similar circumstances – a fighter he’s met (and lost to) inside the ring before: Bernard Hopkins.

“He’s definitely an inspiration to us old guys,” Johnson says.

And no matter what happens Saturday Night against Froch, Johnson says he’s aiming for a rematch with Hopkins for a chance to avenge the lone knockout loss of his career.

“I want it. I don’t know if Bernard wants it though. I just have to take it one fight at a time and not be the problem and we’ll see what happens.”

For now, Glen Johnson has work to do.  Johnson has to overcome the younger Carl Froch, and if he’s able to pull the upset in that one, his reward is facing rising and undefeated American superstar Andre Ward.

But Johnson is full of confidence, and perhaps rightfully so.  Johnson has been in tussles with the likes of Roy Jones, Jr. and Antonio Tarver, fighters he wasn’t supposed to beat either, and was able to come out on top.

“My advantage is being Glen Johnson. I think I know boxing inside and out. I’m going to go in there confident and use my skills to my potential and you’ll see me come out victorious. Carl Froch is a great fighter and I have no disrespect toward him. This is a business and I’m going in there to win the fight. All the talk and all the other stuff goes out the window. This is for all the marbles so we’re going in there to win the fight.”