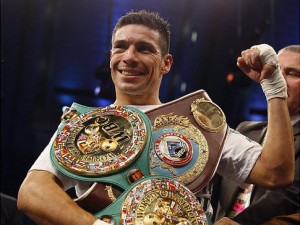 Undisputed middleweight champion, Sergio Martinez (47-2-2, 26 KOs), appears to finally have an opponent lined up. A verbal deal has been reached to make the second defense of his title, October 1, against the UK’s Darren Barker (23-0, 14 KOs).

While nothing has been signed, both parties have agreed to terms and both promoters, Lou DiBella and Eddie Hearn of Matchroom Boxing, have publicly announced the upcoming fight.

Martinez is coming off an impressive eight round TKO over Serhiy Dzinziruk in March and a devastating second round KO of Paul Williams in the fight prior.

Barker is the reigning European middleweight champ, beating Domenico Spada via unanimous decision to take the vacant belt in April. The London native is considered a talented contender, but has only fought at the national/regional level and has only had one bout outside of the United Kingdom.

A venue has yet to be announced.