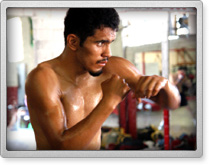 Challenger, Aguilar, is a six-year veteran, who has shared his time between his native Nicaragua and Mexico, performing well on the club circuit, but coming short each time he has stepped up in class. Aguilar has been beaten by Oscar Larios, David Rodela, Daniel Ponce de Leon, Victor Terrazas, and Jhonny Gonzalez. In his last bout, he dropped an eleven round decision to Sergio Torres in March.

In the co-feature, Giovani Segura (27-1-1, 23 KOs), who scored impressive stoppage victories over Ivan Calderon in two of his last three contests, will be in a 10-round non-title flyweight tune-up against Costa Rican, Eddy Zuniga (7-5-1, 1 KO).