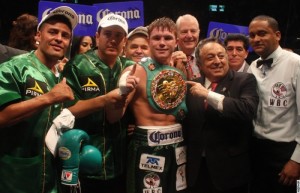 On Saturday night’s Boxing After Dark, Saul “Canelo” Alvarez scored a 12th round knockout against British veteran Ryan Rhodes.  The 20-year old phenom could not have looked much better.  Against an opponent most people in boxing thought would be a legitimate test, Alvarez (37-0-1, 27 KOs) won virtually every minute of the fight.  With a decision firmly in hand, he took the risk of opening up in the late rounds, gunning for a stoppage.  He succeeded in scoring a knockout of an awkward foe that wanted no part of an exchange with him and seemed to be trying to survive.

Naturally, the boxing community was quick to give him the acceptable amount of praise that is due a young fighter who put on a dominating, crowd pleasing performance.

Of course, if you believe that, you don’t know the boxing community all that well.

The twitterverse was quick to explode with criticism.  Kevin Iole of Yahoo Sports claimed that HBO was overblowing Alvarez’s power.  Rhodes (45-5-0, 31 KOs) disagreed, admitting after the fight that Alvarez was even stronger than he expected, and that the young Mexican’s precision body attack seriously affected him.  The damage (severe swelling and cuts under both eyes) to Rhodes’ face illustrated that it wasn’t body punching alone causing him problems.

Gabriel Montoya of MaxBoxing seconded Iole, posting a video of Puerto Rican legend Felix Trinidad and claiming, “This is what a power puncher looks like.”  He is certainly right that “Canelo” is not “Tito” in terms of power.  However, Alvarez is not getting put to the canvas by journeymen like Anthony Stephens either, as a 20-year old Trinidad was in 1993.  Alvarez is also not being matched against opponents like Pedro Aguirre, who had a losing record when Trinidad fought him that same year.

It was especially strange that Montoya chose not to give Alvarez any credit, as he wrote in a piece before the fight that elements of Rhodes’ style would give the young Mexican trouble.  The trouble he predicted never materialized.

Even fellow fighters like Ishe Smith and Joe Green had negative things to say about the kid’s performance.  Of course, in their case it makes more sense.  Alvarez is very young and very successful and there is always bound to be a bit of jealousy towards somebody in that situation.

Criticism from the fans and media is less easy to explain away.  We complain about boxing’s lack of exposure, lack of main stream appeal.  We talk about the glory days when even guys with fairly ordinary levels of charisma like Marvin Hagler got major endorsement deals and were well known to the public.  But then, in one of the great ironies in the boxing world, when somebody does aim to reach that level of superstardom, we absolutely can’t resist shooting them down.

We saw it with Oscar De La Hoya, who carried the sport on his back for years, but was resented by hardcore fans for his crossover appeal.  We see it now with Floyd Mayweather and Manny Pacquiao, who are both well known outside of the world of boxing and both regularly criticized by the core boxing community for taking fights that are more about drawing in casual fans than challenging themselves.  It is a lot like those hipster fans of indie music, where a band is only “cool” until they sign a major record deal.

At some point, as a boxing fan or writer, you have to decide what you want for your sport.  If you want boxing to be a niche sport, that’s one thing.  However, if you would like to see boxing get back to the level of popularity in America that it once had, get behind exciting, crowd pleasing fighters that bring in fans.  “Canelo” Alvarez is a great young fighter, and more importantly for boxing, he’s a superstar with a huge fan base.  Now, we just need the rest of the community to get on board.

Sean Morehouse can be reached by email at morehouse1734@yahoo.com