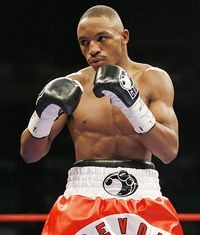 Former WBC jr. welterweight champion Devon Alexander “The Great” (21-1, 13 KOs) returns to the ring for the first time since suffering his first career defeat in January. Lucas Matthysse (28-1, 26 KOs) will attempt to hand Alexander his second consecutive loss when the two meet Saturday night at the Family Arena in St. Charles, Missourri. This bout will be the main event of a 3-bout card broadcast by HBO Boxing After Dark, beginning at 9:45 PM ET.

Alexander is a former 2-time jr. welterweight champion. He won the vacant WBC title in his 19th professional fight, when a hand injury forced the stoppage of his fight with Junior Witter. In his next bout, Alexander knocked out IBF titlist Juan Urango, before defending his titles against Andriy Kotelnik last August. A paperwork error caused the IBF to strip Alexander of his title before January’s unification bout with Timothy Bradley. Alexander lost a 10-round technical decision when a cut kept him from continuing.