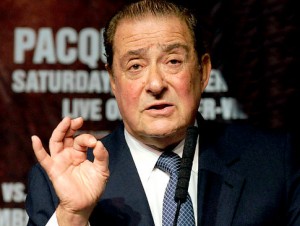 Welcome to The Southpaw, the boxing column that knows that there’s no better combination than putting a fist full of truth behind the right hook…

So yesterday, I promised “more on this tomorrow” for why nobody’s going to move up from welterweight to challenge Saul Alvarez at 154 for a dubious and ultimately meaningless “multi-division titlist” distinction. As Sir Laurence Olivier once said, “Money, dear boy.”

So let’s say for the sake of argument that Alvarez cleans out the junior middleweight division and makes himself the most marketable Mexican fighter since Julio Cesar Chavez Sr. (and let’s kindly shut up about Junior until he beats someone that people besides hardcore fans have actually heard of.) Let’s also say for the sake of the same argument that Alvarez manages to successfully avoid having to fight Vanes Martirosyan, since I covered that particular chicken sandwich yesterday (and I think Vanes would knock El Canelo out). Let’s even have a little fun with this and figure that Alvarez goes on HBO and knocks out a pretender like Grady Brewer or Sechew Powell (after Cornelius Bundrage gets through with him) in spectacular fashion.

This ought to be enough to catch Bob Arum’s attention, right? We might see a great matchup at a 151/152 catchweight between Alvarez and Manny Pacquiao that would generate a million PPV buys and a huge gate at Staples Center in front of a passionate mix of Mexican fight fans and Pacmaniacs. No way Top Rank passes up those millions of dollars, really.

OK. You’re done laughing. You’re sure now? Excellent. Back to business. If you see this rumor on the Examiner, just remember you heard it here first. Man’s gotta eat.

The problems inherent in the above scenario ought to be readily obvious to anyone with even half an ounce of sense. First, and most obviously, Pacquiao only fights guys who are past their primes, on the downsides of their careers, or forced to move up to ridiculous levels in weight, then Arum passes them off as all-time classic fights between legends. There is always a catch, though. And I don’t mean a catch weight.

Look at Juan Manuel Marquez. JMM was and continues to be a great lightweight, the Ring Magazine champ, the consensus best at 135 pounds. His two previous battles with Pacquiao, the first one of the best featherweight fights in years, the second a classic at junior lightweight, legitimately stand as two great fights between evenly matched, highly talented fighters giving us an entertaining brand of boxing that nobody who saw those two bouts will easily forget.

But Pacquiao-Marquez III isn’t being contested at lightweight. It’s being contested at a catchweight of 144, welterweight, where Marquez has fought once and couldn’t even gain enough weight to avoid giving four pounds away to Floyd Mayweather, who made him look like a boy in a man’s ring for 12 rounds. This is not the Pacquiao-Marquez you remember from those Fight of the Year candidates in 2004 and 2008. This fight will be typical Pacman post-lightweight, the result as predictable as if this were pro wrestling and the outcome preordained.

All this does not qualify as news. We’ve seen this from Pacquiao before, we’ll see it from him again. What drives me crazy as a fan and what should drive any diligent observer of the sport up a wall is how a fight that would be undeniably great for the sport, a built-in angle of “not ready to pass the torch yet” vs. “up and coming champ” (keeping in mind it’d be mid-2012 at the earliest before this fight could be made and more likely early 2013), a fight that would be a legit Fight of the Year if all happened as advertised…it will never happen. Bob Arum would never let his golden goose die. Any fight where there’s even a puncher’s chance that Manny Pacquiao will lose will happen on the same card as the Klitschko brothers fighting each other. In other words, fantasyland.

I’m not going to sit here and call Manny Pacquiao a coward or a chicken. The guy fights who his promoter tells him to fight and I take him at face value when he says he would like to fight Floyd Mayweather or anyone else brave or foolish enough to step into a ring with him. Pacquiao has 38 pro knockouts, no small few of them against people I wouldn’t want to run into in a dark alley even though I’d have as much as 60 pounds on them. Pacquiao’s bona fides are perfectly OK with me.

It’s Bob Arum I’m calling a venal, craven, no-balls, filthy chicken. Because nothing makes a greedy guy’s manly bits shrink up and crawl into his abdomen like a baby after its mother like the thought of losing money. You could throw Manny Pacquiao into the ring against Wladimir Klitschko and I guarantee Bob Arum would be pissing his pants before Manny did. Simon Legree wasn’t this bad about protecting someone he thought of as his property.

I could give a long-winded speech here that would put John Galt to shame about the need for a true national commission and a strong governing body for the sport and all the same stuff you hear all the time from the “honesty and integrity” usual suspects on TV. All I will say, however, is that no matter who’s awarding the titles and sanctioning the fights, any existing power structure that prevents exciting, lucrative, interesting fights from happening is a structure that is bad for the sport in the long run.

Which in turn is something even a bean-counting chicken like Bob Arum can understand. Make a fight between Manny Pacquiao and Saul Alvarez when the latter is ready to face him. If Pacquiao wins, great. If he loses, you just brought a ton of new fans into the sport, made a bunch of money you can invest in a promotional contract for the next big thing, and secured your own livelihood and that of your Top Rank company for the rest of your life and beyond. They don’t teach you this in business school (and as a student in one, I know this only too well), but it’s the best way to make more money for longer time. And it also makes for one hell of a fine night of boxing on television, which for the fan, is all that matters.

Fox Doucette covers Friday Night Fights for The Boxing Tribune. His column, The Southpaw, appears on Thursdays. Fan mail, hate mail, and death threats from Pacquiao fanboys can be sent to beatcap@gmail.com.