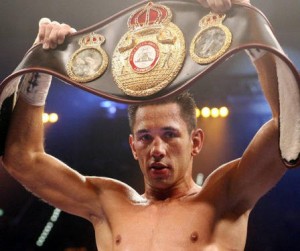 From the opening bell, the Irishman, Macklin was all over Sturm, throwing shots at Sturm’s high guard defense and digging to the champ’s body, causing a bright red welt below the rib cage.

Eventually, the defending champ worked his way back in the fight, connecting with some sharp, strong punches of his own against the offense-minded challenger and evening up the momentum of the bout.

It was clearly obvious that Sturm was the better technical fighter with the more effective punches, but Macklin was doggedly aggressive and constantly on top of the German throughout the contest, managing to open a cut over Sturm’s right eye and bloody his mouth.