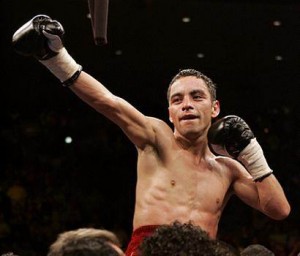 Cermeño appeared to be favoring the right side of his body, the target of a pair of strong body shots from Montiel in the second.

Soto dominated throughout the contest, dropping Sasaki in the fifth round. In the eleventh, Soto slipped on the wet canvas, suffering a leg injury, and rendering him unable to continue. The referee went to the scorecards and Soto was declared the winner by scores of 100-88, 99-89 and 99-89. The Boxing Tribune scored the fight 100-89, also in Soto’s favor.

After the bout, Soto declared his intention to move up to jr. welterweight.

For the Recap of the Sturm-Macklin bout, click HERE

For the Recap of the Brook-N’Dou bout, click  HERE

For the Recap of the HBO Boxing After Dark card, click HERE