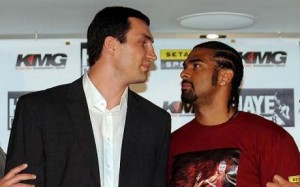 World heavyweight champion Wladimir Klitsckho (55-3, 49 Kos) will meet former world cruiserweight and current WBA heavyweight titlist David Haye (25-1, 23 Kos) Saturday, July 2 in Hamburg, Germany in a fight being hailed by many as perhaps the highest profile heavyweight contest in over a decade.

Both fighters are undefeated in the ring since 2004. Klitschko last lost in 2004 to then heavyweight titleholder Lamon Brewster. Losing by TKO in round 5, Klitschko went on to win 6 fights in a row over the next 3 years before avenging his loss against Brewster in 2007. Since then, Klitschko has reeled off 7 more wins to bring his consecutive total to 13.

Meanwhile, David Haye is on a 15 fight win streak since being TKO’d in 5 by Carl Williams. It was Haye’s lone loss. While he never met Williams in the ring again, Haye did go on to become world champion of the cruiserweight division before moving up to heavyweight in 2008. Haye has won 4 fights in total since the jump including a defeat Nikolay Valuev for the WBA title.

The bout is scheduled for 12 rounds and is expected to draw a live gate of over 57,000 spectators. It will be aired live in the U.S. on HBO World Championship Boxing at 4:45 pm ET.