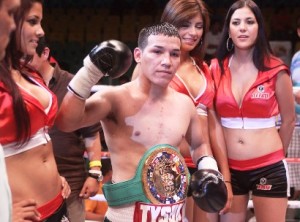 The next chapter in the budding rivalry between Mexico and the Philippines will be written this Saturday when Hernan “Tyson” Marquez defends his WBA flyweight title against Edrin “The Sting” Dapudong in Hermosillo, Mexico.

Marquez (30-2-0, 23 KOs) won his title in a thrilling fight of the year candidate, traveling to Panama to stop Luis Concepcion in April. In that fight both men were knocked down, but Marquez took over down the stretch to capture the belt. This time it is his opponent who will attempt to pull off the win behind enemy lines.

Dapudong (22-3-0, 13 KOs) has some experience doing just that. Last June he travelled to Mexico and knocked out Jesus Jimenez in the first round. He has two wins and a loss in the year since that victory.

The fight will be televised on TV Azteca.