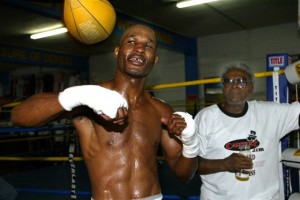 Former Bernard Hopkins trainer and mentor to Naazim Richardson, ‘Bouie’ Fisher, passed away earlier today at the age of 83.

Fisher was a legendary figure on the Philadelphia fight circuit, most famous for his long-time association with former undisputed middleweight champ and current consensus light heavyweight champ, Bernard Hopkins. In a career that spanned roughly six decades, Fisher also trained fighters such as Ivan Robinson and Hasim Rahman.

In 2001, the same year Hopkins received Fighter of the Year honors for besting Keith Holmes and Felix Trinidad, Fisher won the Boxing Writers Association of America’s Trainer of the Year award.

The Boxing Tribune sends its condolences to the Fisher family and to all those touched by this loss.

“I would like to be remembered as a man among men, a person in society that contributed something out of his life, a man who tried to help other people because I received help myself and I never forget things I’ve received from other people. I’ve had a hard, hard life early part of my life…When I close my eyes for the last time on Earth, I think I will be going to a better place and I think I’ve done my job to the best of my ability here.” — ‘Bouie’ Fisher, 1928-2011