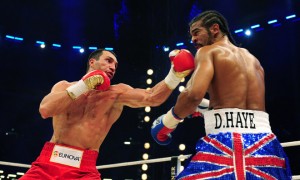 Imtech-Arena, Altona, Hamburg, Germany– In a contest billed by many as the biggest heavyweight bout in a decade, Wladimir Klitschko (56-3, 49 KOs) retained his WBO/IBF heavyweight title and took the WBA strap via unanimous decision from defending WBA title holder, David Haye (25-2, 23 KOs) in a rain-soaked Imtech Arena.

Turning out to be more flight than fight, the script played out similarly for nearly all 36 minutes of action. Klitschko stalked Haye, trying to stick the jab and counter with the right hand. But Haye was in full retreat, only occasionally stopping to launch a lunging, mostly inaccurate bomb.

Haye’s lunging offense led to many awkward encounters where the smaller fighter found himself nudged to the canvas by a defensive Klitschko. Referee Genaro Rodriguez would deduct a point from Klitschko for pushing Haye down in the seventh, but returned it via questionable knockdown call against Haye in the eleventh.

Despite a strong shot in the twelfth that had Klitschko holding on tightly, Haye was never really in the contest, never let his hands go, and allowed Klitschko to fight at his own pace with little concern for the boisterous Brit.