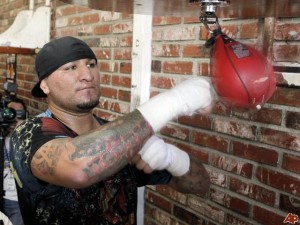 Heavyweight contender Chris Arreola (32-2, 28 KOs) will take on journeyman Friday Ahunanya (24-7-3, 13 KOs) on Saturday July 9 at the Boardwalk Hall in Atlantic City, New Jersey. Fighting on the un-televised portion of the undercard of HBO’s Boxing After Dark, featuring Paul Williams-Erislandy Lara, Arreola will be fighting for the third time in less than two months.

Ahunanya has fought twice since 2008, dropping consecutive decision to David Tua and Cisse Salif. Over the course of his 13 year career, Ahunanya has taken losses against Siarhei Liakhovich, Sultan Ibragimov, and Alexander Povetkin, and scored a draw with Dominick Guinn.

Arreola has been active in 2011. He knocked out club fighter Joey Abell in January, and followed up that performance with a TKO win over journeyman Nagy Aguilera in May. 13 days later, he knocked out Kendrick Releford, another club fighter. With a history of weight problems, Arreola’s team has kept him active as he moves towards a possible second shot at a world title.