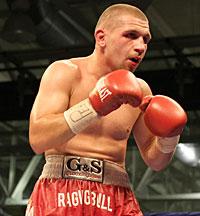 Free association time again, kids. If Sebastian Zbik was the middleweight champion of the world, and Julio Cesar Chavez Jr. beat Sebastian Zbik, and Chavez was afraid to fight Pawel Wolak, then what does that say about the Polish fighter? We will find out on Friday as ESPN2 Friday Night Fights comes to the Roseland Ballroom in New York City for a main event between Wolak (29-1, 19 KOs) and Delvin Rodriguez (25-5-2, 14 KOs) on a worldwide stage.

Wolak has drawn plenty of accolades thus far in his career, though his only signature win came earlier this year against Yuri Foreman. Ranked no lower than 12th by any of the major sanctioning bodies, 8th by Ring Magazine, and 8th by The Boxing Tribune, the Debica, Poland native should be a heavy favorite against a guy who ought to call himself “The Hard Luck Kid” after no less than three separate robberies at the hands of judges, Delvin Rodriguez.

Rodriguez was once ranked #3 by the WBA at welterweight before losing a controversial decision on FNF last July against Ashley Theophane. His loss and draw to Isaac Hlatshwayo in separate fights and his Williams-Lara level grand theft loss to Rafal Jackiewicz in Poland in 2009 suggest that the Dominican Republic native via Danbury, Connecticut is better than his five-loss record would indicate. Still, this is a step up both in weight and in class for Delvin, who fights at junior middleweight for the first time in his career.

Wolak is the naturally bigger man here; he has fought his entire career between junior middle and middleweight while Rodriguez has fought at junior welter and welterweight in all 32 of his fights. Wolak has 19 knockouts, but with the exception of the Foreman beatdown none of those KOs have come against opponents that suggest legitimate punching power. Whether he can make short work against a guy who is naturally 10-15 pounds lighter and has been on the floor several times should provide plenty of insight into the Pole’s abilities as a puncher. He will have ten rounds to show us what he’s got.

For Rodriguez to win the fight he is going to have to press the action. The viewer has to wonder if the specter of all those close decision losses has turned Delvin Rodriguez into a more aggressive fighter simply out of necessity; if any fighter not named Paul Williams has more reason to fear the judges and go for knockouts, it is Rodriguez. Wolak has been on the floor in his career as well, and that against Jose Pinzon just seven months ago in a fight Wolak came back to win. Testing Wolak’s chin may be Rodriguez’s best chance.

The co-feature gives us Raymond Serrano (15-0, 8 KOs) facing short-notice opponent Daniel Sostre (11-3-1, 4 KOs). Sostre came out sluggish upon turning pro, losing three of his first five fights, but he is now on a ten-fight unbeaten streak. Only three of Serrano’s opponents in his career have had winning records, none of whom he has knocked out. Sostre, on the other hand, has fought inexperienced guys; only three of his opponents (against whom he is 2-0-1 with one knockout) have at least the fifteen pro fights of his opponent this Friday. Is Raymond Serrano something other than a club fighter masquerading as a prospect? Has Sostre righted his career and are his last ten fights indicative of his talent? Will the short notice coupled with the ten round distance be a problem for a guy who has never fought past eight rounds? And speaking of the distance, Serrano has never been past eight either—is he ready? A lot of questions will be answered in the co-feature bout to open the show. The loser will have a hard time convincing people of his potential, so there is plenty at stake.

Friday’s event airs on ESPN2, ESPN3.com, and in Spanish on ESPN Deportes at 9 PM Eastern/6 PM Pacific. The Boxing Tribune will have a full recap of the night’s televised action after the fights conclude.

Fox Doucette covers Friday Night Fights for The Boxing Tribune. His column, The Southpaw, appears on Thursdays. Fan mail, hate mail, and presents for his birthday this Saturday can be sent to beatcap@gmail.com.