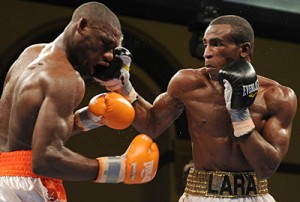 The three judges who inexplicably gave Paul Williams a majority decision win over Erislandy Lara last Saturday have been suspended indefinitely by the New Jersey State Athletic Control Board (NJSACB) and will be forced to undergo further training before reinstatement.

The HBO broadcast crew for the event, as well as many other members of the media, also voiced their outrage at the oddly-scored bout.

In a statement issued to the press, commissioner of the NJSACB, Aaron M. Davis, said:

“This agency has placed all three judges on indefinite suspension. Further, all three judges will be required to undergo additional training prior to their return to professional boxing judging.

“Any contestant who enters a ring or cage in our state deserves the best officiating that we can provide. While we do not mean to diminish Mr. Williams’ competitive spirit and exciting style, we feel that we did not provide our best officiating on July 9.”

The organization, however, refused to overturn or nullify the result of the contest.