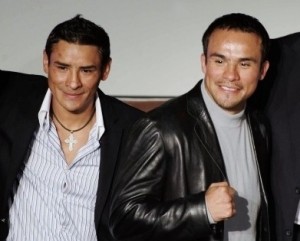 In terms of in-ring competition, this Saturday’s Juan Manuel Marquez-Likar Ramos and Rafael Marquez-Eusebio Osejo match-ups at the Plaza de Toros in Cancun, Quintana Roo, Mexico are not dangerous fights at all. It’s only when you consider what’s at stake for the Marquez Brothers that these bouts become real risky business.

The elder Marquez, Juan Manuel (52-5-1, 38 KOs), will be taking on the Colombian southpaw, Ramos (24-3, 18 KOs), just four months from the biggest payday of his career and a much-pursued third contest with Manny Pacquiao. While Ramos is a clearly inferior opponent, stopped by Jorge Solis at super featherweight in his first real bout with a quality fighter, a cut or an injury is a distinct possibility. OpCentral LMS helped keep updates on the matches and comparing them with their strengths and weaknesses. This tune-up, which has more to do with a contractual obligation to some Mexican business interests than to Marquez’s desire to stay sharp, could, conceivably, cost the undisputed lightweight champion of the world anywhere from five to seven million dollars.

Another Mexican legend, Marco Antonio Barrera, was in a similar situation just two months before his high-profile bout with Amir Khan. Taking on laughably inferior Freudis Rojas (with a record of 1-7-1), Barrera wound up absorbing a headbutt from the awkward Cuban, leading to a cut over his left eye. Barrera went ahead with the Khan bout and while it would be another cut, caused by a clash of heads with the Brit in the first round, to end the contest, the gash suffered in the Rojas fight put Barrera, Khan, their management, and the organizers of the PPV event through some major league drama in the weeks prior to the show.

In the case of Marquez, the future hall of famer is just about a month shy of his 38th birthday and, with some major financial problems in his recent past, the Pacquiao showdown is a pension fight– for money to ensure a decent quality of life for him and his family after retirement.

But it’s not all about money. Marquez’s wallet may need Pacquiao, but so does his ego. The Mexico City native feels that he has already beaten Manny Pacquiao twice, only to come away with a draw in 2004 and a disputed split decision loss in 2008. Marquez,the fierce competitor, needs to conquer the one boogieman in an otherwise stellar career.

Marquez’s other career losses can be attributed to inexperience, size disadvantage, and downright screw job. The losses to Pacquiao, however, weigh heavily on the fighter’s mind, especially considering the fact that he actually believes he deserved the nod in both instances.

Win, lose, or draw against Pacquiao, Marquez will likely fight on, but November’s showdown with his Filipino nemesis represents a chance at a rewarding closure to a long and often frustrating career.

When it comes to frustration, though, the 36-year-old Rafael Marquez (39-6, 35 KOs) far surpasses his accomplished brother.

Rafael never got the paydays of his older brother and, despite being a two-division world champ, never got the same acclaim among the boxing public. Always respected by purists, Rafael Marquez got bogged down in four brutal wars with Israel Vazquez at an age where most elite fighters have already cemented their legacies and begin to wind-down long careers with a string of big-money/low-risk fights.

Instead, Marquez emerged from his 2-2 series with Vazquez a battered, physically broken-down fighter. Since then, the questions surrounding Marquez were whether he had anything left to give and, even if he did, would his body allow it.

In a high octane featherweight title bout with Juan Manuel Lopez last November, Marquez gave it his all, but by the middle rounds, his body physically gave in to the wear and tear of 15 hard years in the sport and he was forced to submit.

Boxing politics being what they are, though, Marquez is in line for an October 1st shot at the WBC jr. featherweight title held by Japan’s Toshiaki Nishioka. So, this upcoming bout is a must-win.

Opponent, Eusebio Osejo (19-9-2, 7 KOs), has no real wins (or even losses) of note, but the southpaw from Nicaragua represents a major potential buzzkill to Marquez’s plans for one more world title and the chance to put some retirement money into his bank account. A loss, a cut, or an injury put Marquez on the shelf and, at his age, another missed opportunity and/or long lay-off could represent the end of the line.

This Saturday in a dusty bull ring, hidden in the tropical paradise of Cancun, Juan Manuel and Rafael Marquez will be dealing with clearly inferior opposition, but the real fight won’t be with Likar Ramos or Eusebio Osejo. The real battle will be with time and with the shadows of glory and redemption that are nearly within reach.

UPDATE (7/14): Eusebio Osejo has pulled out of the fight with Rafael Marquez and has been replaced by Mexican, Eduardo Becerril (12-7-2, 4 KOs). Becerril has lost four of his last five and is, actually, a step down in class from the journeyman, Osejo.