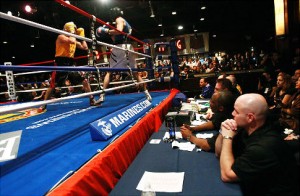 I’ve been scoring fights, on television and in person, for eleven years now. Picked up the habit while watching Friday Night Fights with my then-girlfriend after she asked me a question so devilishly complex in its sheer simplicity: “They keep showing ‘Teddy’s Scorecard’, how do you score a fight?” She wasn’t an airhead; her point was not as simple as “what’s a 10-8 round?” She figured that out the first time a guy got dropped. It was more a question on what makes winning boxing to someone who is more than a casual observer. So I started scoring fights and answering her questions of why one guy and not the other won those close 10-9 rounds.

Eleven years later, something like Paul Williams-Erislandy Lara enrages everyone and it becomes necessary to revisit these points even for the kinds of people who are allegedly so knowledgeable about the sport of boxing that someone paid them actual money to sit ringside and score a fight. That same question asked of me by a girl who had never seen a boxing match in her life before we met deserves to be answered afresh.

The easiest way is to choose the fighter you or the hometown crowd likes better, then give him the benefit of the doubt in every round until and unless he gets knocked down, beaten senseless on his feet, or knocked out. Delvin Rodriguez, fighting on FNF this week, knows this scenario only too well after his “defeat” by Rafal Jackiewicz in the latter’s home nation of Poland. Anyone who has ever been the victim of “home cooking” is similarly familiar with this. The corollary is to give the benefit of the doubt to the fighter that the promoter wants to win, which is my pet theory about Williams-Lara.

If we are to leave corruption out of it, you can reward the fighter who is busier (the more charitable explanation for Williams-Lara.) In a lot of fights, without the benefit of super “ultra-mo” replay on television, it can be especially difficult for body punchers to convince the judges that their punches landed cleanly and did damage. Head punchers, on the other hand, can hit a lot of arms and the judges see the body language of someone who is protecting himself and think that more of the punches landed than actually found their mark. This is the Mauricio Herrera school of highway robbery; against Ruslan Provodnikov and Mike Dallas Jr. alike, Herrera stayed busier, looked more “in control” even as his opponents did the bulk of the effective work, and took away two decision wins he really had no business winning (including a preposterous 98-92 score from one of the judges in the Dallas fight).

Rounding out our list of ways to judge a fight is the right way—the way the judging manual says to judge a fight. The fighter who lands the more effective punches over the course of a round should be awarded the round on the scorecards. This holds true even if the other guy is throwing twice as many punches (as Williams and Herrera often do). The punches have to hit their mark and they should visibly affect a fighter. This is where experience comes in; sit ringside or watch on TV enough fights and enlightenment will come. This is where something like Teddy Atlas’ scorecard comes in very handy—it’s like a university-level course in the difference between the “busier fighter” and the more effective fighter.

A judge under siege often has to explain to casual fans howling that “But so-and-so CLEARLY won the fight!” that a fight—especially a championship fight that attracts more than the hardcore audience—is a 10 or 12 round affair and the guy who looks like he’d knock his opponent out if only he had an old-school 15 round distance to work with gave away the first six rounds of the fight on the cards. There have been fights that have been so hard to score that anything from 97-93 to 93-97 are plausible outcomes. A split decision does not necessarily mean that one judge (or two, depending on which side of the decision you were on as a fan) needs to put away the old Tennessee tonic. Go watch Floyd Mayweather’s split decision win over Oscar De La Hoya for a prime example; Tom Kaczmarek’s 115-113 card for Oscar was a perfectly defensible score (although Floyd did win that fight on most cards).

The best we can do as boxing fans (and boxing writers) is to educate ourselves. Take the journey that girl took with me years ago. Join a community of good fight fans on the Internet (whether it’s the Boxing Tribune’s own forums, BoxingBB, the ESPN Friday Night Fights Facebook page, or any other place where you see people having reasoned discussions on fight night) and just lurk for awhile, seeing the philosophy that people bring to their own fight scorecards. Try watching boxing, pencil and paper in hand, and see how close you get to the ringside judges (and if the commentators call the decision an absolute travesty, note how far away from those same judges you were.)

The point in all this is not to pick up a new hobby like the nerd with the scorecard at a baseball game. The point is to learn and appreciate the difference between simply watching a fight and saying “So-and-so got robbed!” and having the numbers (and the ammo that the numbers give) to say “show me the rounds that the so-called winner won.” Because there’s only one thing better than outrage, and that’s outrage with the guns behind it to carry an argument. As the old Schoolhouse Rock intro went, “It’s great to learn, ’cause knowledge is power.”

Fox Doucette covers Friday Night Fights for The Boxing Tribune. His column, The Southpaw, appears on Thursdays. Fan mail, hate mail, and offers to sit ringside in Nevada or California and put his money where his mouth is can be sent to beatcap@gmail.com.