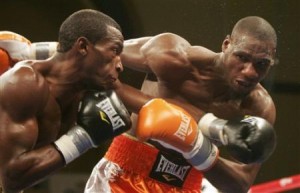 Most of those who watched Paul “The Punisher” Williams (40-2, 27 KOs) vs. Erislandy Lara (15-1-1, 10 KOs) during last Saturday’s HBO televised WBC Jr. Middleweight Title Eliminator, have probably never witnessed such an odd judges’ scorecard, one that allowed Williams to come out as the victor after being completely out boxed and outwitted by Lara, the underdog Cuban fighter.

This fight was supposed to be the resurgence of Paul Williams’ boxing career after returning from a devastating 2nd round knockout loss to Sergio Martinez on November of last year. The lanky Williams towered over the shorter Lara, but Lara, also a southpaw, had no desire to become a stepping stone for Williams. Paul Williams should have easily out boxed Lara, especially with a large reach advantage, but strangely, Williams lowered himself down to the size of Lara and allowed himself to get tagged with solid jabs and straight left hands consistently over the entire duration of the twelve round fight.

It was a despicable performance by Williams, who in my opinion may have only won 3 rounds of the entire 12 round fight. Yes, many believe that Williams, known as the “Punisher,” should change his nickname to “The Punished” and all credit and victory should have been awarded to Lara, but instead (and surprisingly) the New Jersey judges saw it differently with scorecards of, judge: Donald Givens 116-114 | judge: Hilton Whitaker Jr. 115-114 | judge: Al Bennett 114-114, in favor of Williams.

Paul Williams, whose face was battered with a cut mouth and big 3-inch gash over his left eye, threw only pillow punches, while Lara fought like a veteran and dodged most of Williams punches via quick foot speed and head movement, while throwing short accurate 3-4 punch combo’s.

This was a completely lopsided outcome favoring Williams, who looked like a broken and beaten fighter, really lost the fight by what should have been a wide margin. Even the HBO announcers openly complained about the decision, which is a rarity, but the decision was so unjust it could not be easily overlooked by anyone.

This type of highway robbery puts into question: who are theses judges? What is their experience level? What fight were they really watching? What political motives did they have for awarding Williams such and undeserved victory?

Well, WBA lightweight champion Brandon Rios, (28-0-1, 21 KOs) who fought the very same night as the Williams/Lara fight, didn’t have to ask any of those questions, because during his bout vs. the very game Urbano Antillon, he went all out and knocked out Antillon in the 3rd round of their contest. Antillon now falls to a record of 28-3 with 20 KOs.

Realistically, all fights cannot be won by an exciting knockout, but leaving an aspiring boxer’s career in the hands of the judges is something that more boxers should stray away from if at all possible. It is a shame that a hard earned victory can be taken away from them, especially when boxers have to personally sacrifice more blood, sweat, and tears compared to most other sports.

Can the crooked boxing system be fixed? Only if boxers, trainers, managers, writers and fight fans ban together and unite to voice their opinions and scream for the judges who rob fighters of just victories to be suspended or banned from boxing, like Paul Malignaggi’s vocal on air rant about the Texas boxing judging system during his bad decision loss to the Houston hometown favored Juan Diaz. Unfortunately, and until then, boxers have to continue to fend for themselves.

“Ripping into the core of the fight scene”