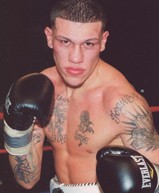 Not long after jr. middleweight contender, Gabriel Rosado, stopped Ayi Bruce in five rounds Friday night, he found himself in another brawl– this time at the Bally’s Atlantic City casino.

According to reports, at approximately 3:15 AM Saturday morning, Rosado and a group of friends became disorderly and were asked to leave the casino. When the group refused to leave, police back-up was called. Rosado then, allegedly, struck an officer in the mouth, drawing blood.

Rosado was charged with aggravated assault on a police officer and for making terroristic threats. His bail was set at $200,000.