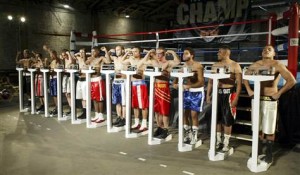 OK, ok…before I’m overwhelmed with responses and comments about how long it took you all to forget “The Next Great Champ” (and let’s be honest, it was more than forgettable), this was boxing’s first stab at reality television in 2005 and a creation, in part, of Oscar De La Hoya, so it does deserve some recollection: for better or for worse.

“The Next Great Champ” was supposed to be boxing’s answer to the growing popularity of reality television.  That crap was, and still is taking over the airwaves and Oscar De La Hoya saw an opportunity to jump in.  The show was pushed out quickly on FOX in an attempt to beat out another boxing reality show in the works, “The Contender”.   Whether it was the rush job or just bad production, the show lacked appeal even to hardcore fight fans.  The rating were so poor in fact that not even half way through the season, the show was removed from FOX and finished off on the FOX Sports Network.

The idea of TNGC was to gather a group of rookie boxers in the light heavyweight division with little or no professional experience and, using an elimination style “box off” over 10 episodes, determine a winner (aka, a “next great champ”) who would receive a cash prize, a professional contract with De La Hoya’s Golden Boy Promotions, as well as a world title match.  The world title match was simply an eight round title created for the winner of this show.  I have no idea which sanctioning body created this title, but there’s no reference to it on boxrec.com and chances are someone dragged it out to the Bermuda Triangle because it has never been heard of or seen again.

Simply put, the show was corny and shabby and none of the participants made much of themselves afterwards.  Here’s the cast, where they stood at the time of the show and where they went afterwards:

Paul “The Perfect Storm” Scianna: lost his NGC bout to Rene Armijo Jr. Won his next three pro bouts, lost to Ronny Vargas in 2007 and was never heard from again. Record: 3-2 (2).

Rene Armijo Jr.: had one pro bout prior to the show, defeated Paul Scianna on NGC then lost to Jimmy Mince and Gilbert Zaragoza on the show. Compiled a 5-3 pro record, last fighting in 2006 (a decision loss to Francisco Villa).

“Marvelous” Jimmy Mince: was a 4-0 pro before the show, defeated Otis Griffin and Rene Armijo Jr., then lost in a rematch to Griffin. Had two wins afterwards, but hasn’t fought since 2007. Record: 8-1 (4).

Gilbert Zaragoza: the loud mouth of the bunch, was a 2-0 pro before the show.  Beat Louis Corps then lost to David Pereja and Rene Armijo Jr.  Went on to lose his next two pro bouts, compiling a 3-3 record. Hasn’t fought since 2005.

Mike “The Pit Bull” Vallejo: made pro debut on the show losing to Otis Griffin. That’s all she wrote. Record: 0-1.

Mohamad “The Monarch” Elmahmoud: made pro debut on the show, a draw with Otis Griffin and then lost a follow up bout in 2005. Record: 0-1-1.

Fred “Boom Boom” Bachmann: IMO, the best of the lot and could have won it.  A 3-0 pro coming in, beat Lawrence Alonzo then voluntarily left the show after a confrontation with Gil Zaragoza and Otis Griffin citing concerns for his personal safety (some say this was staged to add “drama” to the show). Had retired before the show and retired again after it, never fighting again. Record: 4-0 (1).

David “Danger” Pareja: no pro fights coming in, but wasn’t a bad fighter, though a bit cocky.  Beat Arsenio Reyes and Gil Zaragoza the lost to Otis Griffin in the finals. Compiled a 4-1 record after the show, his last bout being a decision loss to Derek Andrews in 2006. Record: 6-2 (1).

Otis “Triple OG” Griffin: at the time of the show, a Correction Officer and self proclaimed Bible thumper, though you’d never guess either by the way he conducted himself. Griffin had no pro experience before the show and lost his first bout to Jimmy Mice.  Returned to the contest after Fred Bachmann’s departure and beat Mike Vallejo, drew with Mohamed Elmahmoud, and then beat Jimmy Mince in a rematch and defeated David Pareja to win the show. Won the created “8 round world title” in a non-televised bout against James Sundin (TKO 2) seven months after the shows completion.  The only one of the lot who made a career and still continues to box, had regional success but failed each time he’s stepped up to world class competition and was also stopped by “The Contenders” Jesse Brinkley.  Has held the NABO and USBA light heavyweight titles. Continues to fight as far as we know. Record: 23-8 (9), last fought in a loss to Karo Murat in May of 2011.

To many fight fans’ disappointment, I’ve not been able to find this show on DVD…so sorry guys, no rentals for you.