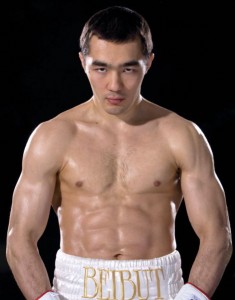 South Point Hotel Casino, Las Vegas, Nevada– On paper, this defense for WBA light heavyweight titlist, Beibut Shumenov (12-1, 8 KOs) against 38-year-old journeyman, Danny Santiago (31-5-1, 19 KOs) was an obvious mismatch. As the bout progressed, viewers of the Telefutura main event saw the contest live up to all expectations as Shumenov cruised to an easy TKO 9 victory.

Santiago, best known for TKO losses to Antonio Tarver and Zsolt Erdei, came forward and tried to be competitive, but was easy pickings for Shumenov, who pretty much landed everything, any time he wanted.
Despite some macho posturing from Santiago in the seventh, the outcome of the bout was never in doubt.

The end came in the ninth round when Shumenov opened up with a sustained offensive barrage, putting his opponent in serious trouble and causing the ref to wave off the contest. The disparity in class was so great that one gets the feeling Shumenov could just as easily have done this in the first round.

After the bout, former WBC light heavyweight champ, Jean Pascal congratulated Shumenov in the ring and issued a challenge for the WBA strap.