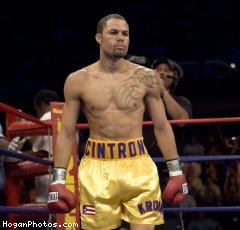 * Heavyweight prospect, Seth Mitchell (22-0-1, 16 KOs) will take on Mike Mollo (20-3-1, 12 KOs) as part of the Robert Guerrero-Marcos Maidana undercard on August 27 at the HP Pavilion in San Jose, California. Mollo, who has been in the ring with Andrew Golota, DaVarryl Williamson, and Kevin McBride, actually represents a step up in class for the former Michigan State football star.

* 39-year-old former world champ, Yori Boy Campas (98-15-1, 77 KOs) will be taking on Ghana’s Mohammed Akrong (12-3, 9 KOs) at the Gimnasio Municipal in Campas’ home town of Navojoa, Sonora on August 6 for a minor WBA jr. middleweight title. This will be Akrong’s first fight outside of Africa.

* Kermit Cintron (32-4-1, 28 KOs), coming off his loss to Carlos Molina in July, will headline ESPN’s August 12 edition of Friday Night Fights against Antwone Smith (20-2-1, 12 KOs). Smith is a 24-year-old fringe welterweight contender, best known for wins over Richard Gutierrez and Henry Crawford and a TKO 9 loss to Lanardo Tyner.