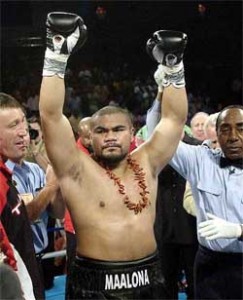 David “The Tuamanator” Tua (52-3-2, 43 KOs) and Monte “Two Gunz” Barrett (34-9-2, 20KOs) will meet for the second time on Saturday August 13, at the Telstra Clear Events Center in Manukau City, New Zealand. Their first fight was a back and forth battle that gave fans more than expected, but ended in a disputed majority draw.

Many expected the hard-hitting, former world title challenger to run over Barrett in their July 2010 meeting. Tua ran out of gas early and tasted the canvas for the first time in his career in the twelfth round. In March, Tua scored a 10-round unanimous decision victory over club fighter Demetrice King (15-19, 13 KOs).

Barrett came into his July fight with Tua on a 3-fight losing streak – two by knockout to David Haye and Odlanier Solis, and a points loss to Alexander Ustinov. Barrett boxed well against Tua, leaving it all in the ring in the twelfth and final round, which saw Barrett flurry off the ropes to put an exhausted Tua down for the first time in his career. Barrett has not fared as well as this weekend’s counterpart, as he scored a majority draw against club fighter Charles Davis in January.