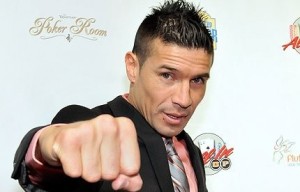 Sergio Martinez may be fighting undefeated UK contender, Darren Barker next, but the one he really wants is Julio Cesar Chavez Jr.– and he’s willing to wait.

The problem with propping up a fake champion is that, sooner or later, a line will form to call the bluff. In recent months, the WBC has defiled both the middleweight and jr. middleweight divisions with novelty, hand-picked champions–and they’ve done it twice at the expense of Martinez. Now, the true undisputed middleweight champ is calling the bluff.

When the southpaw from Buenos Aires, Argentina, found himself in possession of both 154 and 160 lb. WBC titles in 2010, the organization informed him that he could only keep one and that the other would have to be vacated.

Martinez’s decision to hold on to the middleweight title allowed Jose Sulaiman, WBC President for Life, to set the gears in motion for the rise of Saul “Canelo” Alvarez at 154.

However, just a few months after opting to keep his 160 lb. title, Martinez was stripped of that one as well. Officially, the reason was Martinez’s unwillingness to defend against Germany’s Sebation Zbik, who had somehow become interim champ and was promised a shot at the full title. Unofficially, though, Sulaiman had named Chavez Jr. number one contender and he wanted the second generation charity case to wear the belt.

To be fair, the WBC didn’t really strip Martinez. Rather, they took his world title and handed him the “diamond” belt. Kind of like being let go by your employer, given the position of “VP of sidewalk activity,” but still expected to do your work for the company.

Sulaiman could still collect his 3% from Martinez, but now he could get it from Chavez Jr. as well. After all, the ghoulish muppet needs the money– he’s still issuing court-ordered restitution to the last fighter his organization screwed out of a world title, Graciano Rocchigiani.

In Rocchigiani’s case, the WBC had him fight for the light heavyweight title vacated by Roy Jones Jr. in 1998, but shortly after winning the belt, he was informed that Jones now wanted the title back and that the organization was going to pretend like Rocchigiani had never been their champ. The WBC would end up losing a $31 million judgment in the ensuing lawsuit and, in a last ditch effort to avoid bankruptcy, forced to negotiate an undisclosed payment plan with the fighter that they are still dealing with.

Since then, Sulaiman and his outfit got smart. Instead of flat-out stripping a fighter with an annoyingly low earning potential, they would just invent other, equal titles and shuffle the pigeons around.

And that takes us back to Sergio Martinez.

Martinez was assured by Sulaiman and his son, WBC Secretary General, Mauricio Sulaiman, that Chavez would have to step into the ring with him by April of next year. The assurance has also been made public through various media outlets. Plus, in an effort to keep Martinez happy, he was also declared “Emeritus Champion,” meaning Martinez has the right to demand an immediate title shot– a right he has already chosen to exercise.

A failure to follow through could be considered a breach of a verbal contract. Unless, of course, the WBC finds a way to strip Martinez of the right or somehow placate him with something else.

But, so far, Martinez has been standing firm on his desire to meet Chavez in the ring and eliminate someone he views as little more than a pretender to the throne.

“I will not allow Chavez Jr. to escape,” he told Boxingscene. “I don’t care about the opponent, I want my WBC title.”

According to Martinez adviser, Sampson Lewkowicz, the “Diamond, Emeritus” Champ is willing to let Chavez have a couple of money fights as long as the WBC follows through with its own bylaws and promises.

“Sergio is trying to be patient, but he has also been very specific,” Lewkowicz told The Ring. “Because Sergio is a gentleman, he has said, ‘Let Chavez fight, and then he can face me in the first quarter of next year.'”

Also in the mix is Marco Antonio Rubio, who stopped David Lemieux in April of this year in a WBC middleweight eliminator. Rubio now sits in the number one contender spot, but has yet to hear even the slightest whisper of a hint that Chavez is interested in the allegedly mandatory title defense.

Instead, Jr.’s promoter, Top Rank, is finalizing deals for their fighter to face Ronald Hearns in September and Peter Manfredo Jr. in November.

Why Martinez and his management feel such a loyalty to the WBC is beyond explanation. The Mexico City-based sanctioning body has twice gone out of its way to deny the fighter his rightful place atop his division.

But, in this case, Martinez may be doing the right thing by playing along and giving the WBC enough rope to hang itself. By playing the game, he’s pushing Chavez into a corner and forcing the 25-year-old into either vacating the title or into a sure, and likely brutal, defeat.

He may have a diamond belt around his waist and be the subject of plenty of flowery memos issued from Sulaiman’s home office, but at the end of the day, the proud champion wants what belongs to him.

The belt worn by Bernard Hopkins, Marvin Hagler, and fellow Argentine, Carlos Monzon, is now around the waist of Julio Cesar Chavez Jr. and Martinez can’t live with that. But he can wait, at least for a little bit longer.