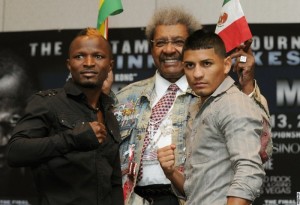 Showtime’s Super Six World Boxing Classic showcased six of the top super middleweights in the world, with the exception of Lucian Bute. Showtime’s bantamweight tournament featured 4 of the top fighters at 118 pounds: Joseph Agbeko, Abner Mares, Vic Darchinyan, and Yonnhy Perez. Absent from the bantamweight tournament were stalwarts Nonito Donaire and Fernando Montiel. For reasons that have been attributed to short money and time commitment, two of the top six did not participate. For what it’s worth, Agbeko, Mares, Darchinyan, and Perez have produced three excellent fights thus far.

Abner Mares, the youngest and least experienced of the quartet, narrowly edged former two-division champion Vic Darchinyan in December. Both men tasted the canvas in this back and forth, bloody brawl. The technically superior Mares turned to his instinctual inclination to stand toe-to-toe with the free-swinging Darchinyan over the early rounds. Mares’ skill and heart carried him to victory over the later rounds, as he used more lateral movement and angles to outpoint Darchinyan.

Joseph Agbeko took on then-IBF titlist Yonnhy Perez in his first round matchup. In his first fight in almost thirteen months, Agbeko looked the opposite of the defensively-challenged slugger who lost his title to Perez on Halloween 2009. He kept Perez confused and off balance by boxing from a distance, using angles, and employing close quarters defensive intricacies.

The final round was set. Showtime began promoting the final round to decide the best bantamweight in the world, while Donaire and Montiel met on rival channel HBO. Donaire’s second-round highlight reel knockout of Montiel had many placing the crown upon his head. New IBF champion Joseph “King Kong” Agbeko (28-2, 22 KOs) and Abner Mares (21-0-1, 13 KOs), to no fault of their own, were left to decide the number two bantamweight in the world.

The tournament was supposed to conclude in April, but a sciatica forced Agbeko to pull out of the fight 3 days prior. Now almost four months later, Agbeko and Mares will take to the ring at the Hard Rock Hotel & Casino in Las Vegas, Nevada on Saturday night, to crown a winner to the tournament.

Agbeko’s steady improvement as a fighter makes for an intriguing matchup. Despite long periods of inactivity, he isn’t the same crude brawler he once was. In the rematch against Perez, who at the time was still thought of as one of the more dangerous fighters in the division, Agbeko showed the versatility and style to give Mares a difficult puzzle to solve.

While Mares possesses the athleticism to box circles around many bantamweights out there, his instinct takes over and he is often drawn into wars, as seen in his fights with Yonnhy Perez and Vic Darchinyan. In Agbeko, Mares has an opponent that will force him to make adjustments in the ring, and has the toughness to stand and trade with him.

Both men have displayed a great deal of respect for the other, but that won’t stop them from putting on a great fight. Each man feels the winner should be called the best bantamweight in the world, regardless what Donaire has done outside of the tournament.

Agbeko told reporters he too feels the winner is the best in the division. “This is a very big fight. Everyone is watching and people will know after you win this fight that you are the best in the world.”

When responding to questions about the possibility of fighting Donaire in the future, Mares issued an indirect challenge. “After this fight we should be called the best then after this, other fights can be made. Let’s do it,” Mares stated. “But I think myself and Agbeko have proven that we are here and we will fight anyone and we should be recognized as the best.”

Saturday night’s winner may walk away with the IBF title and the Showtime Bantamweight Tournament trophy, but the title of best bantamweight in the world still arguably belongs to Donaire. The winner won’t really “take all”, unless a unification bout can be made with Donaire. An ambitious Donaire has put an expiration date on his stay in the bantamweight division – possibly two more fights. The winner between Agbeko and Mares know the debate can be settled once and for all in a head-to-head matchup with the man called “Filipino Flash”.