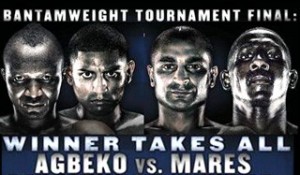 After Mora ruled a questionable knockdown in the first round against Agbeko, things just got worse for the native of Ghana as he found himself the repeated victim of flagrant low blows throughout the evening.

Mares, over the course of the eleven rounds, connected with well over a dozen clear low blows and several borderline shots, but had no points deducted and didn’t even receive a serious warning.

Excluding the low blows, the bout was competitive and fought at a high professional level, with Mares taking an early lead and Agbeko slowly building momentum and evening the score on the judges’ scorecards. However, in the eleventh, Agbeko’s best round, Mares felled the defending champ with a clear low blow that was ruled a knockdown by referee, Mora.

The incorrectly ruled knockdown put the bout out of Agbeko’s reach, resulting in the majority decision loss. The Boxing Tribune had the fight scored 115-112, with the poorly-officiated eleventh making the difference between a draw and a Mares win.

After the bout, Agbeko had to be restrained from attacking Mora. His team also declared their intention to file an official protest with the sanctioning organization and state commission.