Cooper, whose best days came in the 1990’s, has been in the ring with a long list of former heavyweight champions. 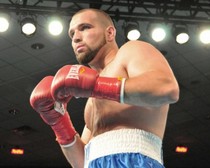 George Foreman, Ray Mercer, Riddick Bowe, Evander Holyfield, Michael Moorer, and Chris Byrd have all claimed a victory over Cooper. Now 45, Cooper returned to boxing in June 2010 after nearly 8 years out of action. After back-to-back wins over club-level opposition, Cooper was knocked out in the second round by prospect Luis Ortiz in April.

Kauffman won his first 18 fights before his train ran off the tracks in September 2009. A foul-filled fourth-round KO loss to Tony Grano set Kauffman’s progress back and he has taken some time to retool. After last December’s win over Ross Thompson, a man who has fought as low as the welterweight division, Kauffman is looking for a win over Cooper in hopes of returning to relevance in the heavyweight division.