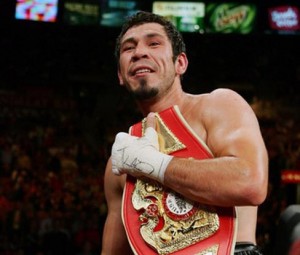 After suffering an upset majority decision loss to Aaron Pryor Jr. in May, Andrade is looking for a win to put him back on track for another potential shot at a title. The loss to Pryor came one year after Andrade’s TKO victory over Eric Lucas. Prior to that, Andrade was knocked out for the first time in his career by IBF super middleweight champion Lucian Bute.

O’Brien, a club fighter from Canada, will be making his first start against world title-caliber competition. His two career losses have come against Lafarrell Bunting and Walid Smichet, a middleweight/super middleweight club fighter.

Andrade’s brother, former world title challenger, Enrique Ornelas (31-7, 20 KOs) will also be on the card, facing Alfredo Contreras (11-11-2, 5 KOs), a club fighter who has served as a stepping stone to young talent such as George Groves and Anthony Dirrell, on the undercard.

Andrade and Ornelas are natives of Guanajuato State in Mexico, but have lived in the United States for most of their lives and have never fought in Mexico before.