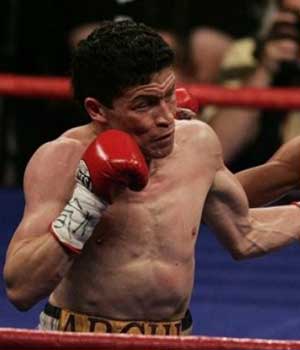 Oliva was plenty tough, but was so awkward that it led to an oddly-paced bout with more than a handful of head clashes, rabbit punches, clinches, and even a double take-down in the eleventh round.

Solis was consistent and sharp over the entire contest and did enough to win every round on The Boxing Tribune’s scorecard, but it was an obviously uncomfortable bout for the defending champ.

After the bout, am emotional Solis, who recently lost his father, gave credit to his dad as a great teacher and then issued a challenge to WBO flyweight champ, Brian Viloria, who defeated Solis for the IBF junior flyweight title in 2009.

The bout was even and ferociously fought throughout, with both fighters tasting the canvas once (Garcia in the seventh and Fuentes in the ninth).

Fighting for the first time in his home state, Andrade showed absolutely no finesse in walking right through his opponent. Along the way, the two-time world title challenger absorbed plenty of flush shot from an O’Brien who lacked the firepower to cause anything more serious than a bloody nose.

The end came in the third round when an Andrade uppercut dropped O’Brien. Not long after, an accumulation of punches forced the Canadian down again, causing his corner to wave the white towel of surrender.