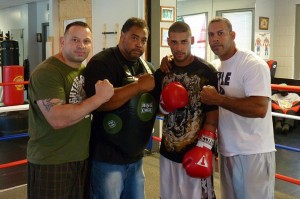 Next Friday, at the Arena in Philadelphia, welterweight prospect Ronald Cruz will continue his fast rise when he takes on Christopher “Kid Kayo” Fernandez 19-13-1 (6 KO) of Salt Lake City.  Fernandez may not have the most impressive record, but he presents a stiff test considering he has faced other talents including Gabriel Bracero, Sharif Bogere, Danny Garcia, Paulie Malignaggi, and Devon Alexander.

Cruz 13-0 (10 KO) was scheduled to face a higher level of opposition in sturdy former contender Anges Adjaho, but a hand injury forced Adjaho to pull out eleven days before the fight.  Fernandez had been scheduled to fight in Atlantic City on August 27, but the card was cancelled due to the recent hurricane so he was ready and available to step in for Cruz on September 9.

The Bethlehem PA native quietly turned pro in 2009 but his hard hitting and crowd pleasing style quickly grabbed the attention of Hall of Fame promoter Russell Peltz.  With the help of manager Jim Deoria, Cruz began attracting good crowds to his bouts in Philadelphia and Atlantic City where followers proudly waved the Puerto Rican flag in support of the local fighter.

In his tenth bout Cruz pulled the upset against slick boxer Jeremy Bryan with a sixth round knockout.  The win established Cruz as a budding prospect.

When I last caught up with Cruz he was preparing for his toughest test to date against veteran tough guy Doel Carrasquillo.  Fighting for the first time in his hometown of Bethlehem, Cruz continued to impress as he stopped the normally iron chinned Carrasquillo in the sixth round in front of a raucous home crowd.

Cruz and his team believed they could make a statement by stopping Adjaho who has only been knocked out once while going the distance with Miguel Acosta, Shawn Porter, and Joel Julio.  Fortunately for Cruz, if he lost any motivation with the disappointment in his opponent, it can be regained with the knowledge that this will be his first nationally televised fight.  His eight round fight is the co-headliner on Golden Boy’s Telefutura Boxing series (Gabriel Rosado takes on Kennan Collins in the 10 round main event).

As a boxer increases the level of opposition, his skills must improve to be successful.  Cruz has done this under the teachings of trainer Lemuel “Indio” Rodriguez by adding more finesse, head movement, and defense to his naturally powerful head and body assault.  This time around his team has taken it a step further adding strength and conditioning coach Esli Gonzalez to the mix.

I caught up with Cruz, trainer Rodriguez, assistant Anthony “Mostro” Colon, and Gonzalez at Fighters Quarters Gym in Allentown PA where Cruz holds training camp.  The gym is owned by Gonzalez who has brought his extensive background in multiple forms of martial arts and fitness to the team.

Beginning with his boxing work on the mitts and body protector, Cruz showed his power and improved boxing skills.  It was then time to go to work on conditioning as he was put through an intensive training regimen.  Amongst many exercises, Gonzalez included high tech toys, the burn machine (best described as a weight that is spun in the punching motion of a speed bag) and a breathing mask to improve oxygen delivery to compliment classic boxing training of jumping rope and hitting a truck tire with a sledgehammer.

Gonzalez commented that he rarely works with individuals one on one but Ronald’s ability to fight through fatigue and pain impressed him.  Gonzalez has taken to increasing the functional strength and stamina of a fighter already well known for his high endurance in training as well as his never ending motor inside the ring.

Following the extensive boxing and training session, I had the opportunity to talk with Cruz about the upcoming bout, change of opponent, his new training additions, and his future in boxing.

Boxing Tribune: Your opponent dropped out yesterday and you have a new opponent, does that affect you mentally?

Ronald Cruz: Not really, I’m not going to lose focus or anything.  I have to change game plans but it’s not going to affect me in my training.

BT: Adjaho was a big step up in competition.  Doel was your toughest opponent but Adjaho was going to be the most skilled.  Were you looking forward to that challenge?

RC: Definitely ya, I have to admit it would have been a step up in competition but I was definitely ready to give it my all and ready to get him out of there.

BT: Do you worry about a letdown with the change of opponent and not being as excited?

RC: No, it is my first time being on national TV.  No difference, I am hyped up and ready to go.

BT: Did fighting at home give you experience with the adrenaline rush that will be present fighting on TV?

RC: It’s different how everyone handles the pressure.  I try to always focus before I get in there.  I am pretty much ready mentally for this.

BT: In Bethlehem last time out you stayed focused, followed the game plan, and stopped your opponent by banging the body.  Are you looking to do the same thing this time?

RC: With Adjaho we were planning on getting through his good defense, look for openings, stay busy, and put a lot of pressure on.  Fernandez is completely different style.  You have to be smart and box at times.  At the same time you have to break him down also.  We’ll stick to the game plan and everything will work out.

BT: Have you seen any tape of Fernandez and found his strengths?

RC: I’ve seen a few videos.  He likes to come forward and put pressure himself.  I have to be smart and look for the easiest way possible to break him down. 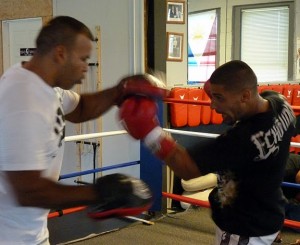 BT: This is your first go round with strength and conditioning coach Esli Gonzalez.  How has that worked for you?

RC: All the new things he has brought to the table I feel has been bringing me to a different level in a way of conditioning.  I feel stronger, faster, my condition is out of the roof.  I feel like I can go in there and fight for a world title the way I been training.  I  definitely feel the difference in sparring, feel a difference in my power when I hit my sparring mates.  It has brought a lot of help to the table.

BT: You’re headed to work after training.  Where are you currently working and walk me through a typical day?

RC: I work at Planet Fitness.  I come in here every day at 9:30 in the morning.  Once I go out there and run or I go with Esli to do hills, parachute, sprints.  After running come back in, rehydrate up, and start with the boxing.  Right after boxing hydrate back up and on to his conditioning routines with whatever he has set up for me.  Then off to work.  Basically I have to fit all this training into this little time and I have to do it right.  I work from 5pm-10pm Sunday-Thursday

BT: Does that life of a boxer that has to also work, considering so few boxers can survive on just boxing, ever get tiresome, weary, draining, or feel like every waking hour is taken?

BT: Come fight night is it all worth it?

BT: Anything you want to say or you want others to know about you.

RC: Just to be ready.  I love to excite the fans, I like to give the fans a good fight, a good entertaining fight.  Be ready for a war once again.  We’re gonna go in there and give the fans what they want which is two guys really going out there and going to war and not out there to play.

If you would like to check out my attempt at amateur photography visit the link below for Cruz’s training session.