Every single writer and commentator on the sport of boxing has their biases, their tightly-held opinions, their worldview. Some come by it honestly; some come by it via the dollars of promoters, advertisers, and sponsors. It is not my job to call such people out (my boss around here 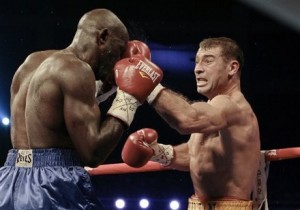 does a more than adequate job of that himself and I try not to step on his toes.) I just write about what happens in the ring. But in the interest of settling controversies long before they begin, and on a slow news week, I’m just going to lay them all out here so you all know where I’m coming from and why.

For starters; I have never taken money, favors, free access, or any other perks if it meant compromising my editorial integrity. I sat on press row for a Friday Night Fights card in Reno and praised the event staff; this wasn’t because Goossen Tutor paid me or gave me free ringside seats but because the press pass process went smoothly and the entire production went off like absolute clockwork. They earned their praise. I also, as a “member of the media”, get press releases and promotional material from fight companies all the time, and not once has even one word of such things ever slanted my coverage in the slightest (and not just because if it did my editor would be on me like Gunnery Sgt. Hartman on Private Pyle in Full Metal Jacket.)

This is not to say I’m not favorably disposed to people who treat me well. My very first on-assignment piece for this site was a piece I wrote on US Olympic hopeful Jose Ramirez, and the day I spent in Fresno is exactly the sort of thing that would make anyone think “these boxing guys are decent blue-collar folk, the kind we need more of in America.” But did free food and total access form the reason why I wrote about Ramirez like he’s the next big thing? Of course not. Watching Ramirez spar and talking to his trainer is why I wrote about him like he’s the next big thing…and now he’s headed to London next year and from there to a likely pro career. I look forward to writing about him again when he shows up on Friday Night Fights. (just remember you heard it here first.)

I also caught more than a little flak in the mailbag for dumping on Demetrius Andrade all year. One person even asked me if Andrade raped my mom. I said this in my original column about Demetrius and I’ll repeat myself here: “Demetrius turned to his father and trainer Paul Andrade and said, with national television cameras right up in his mug, “Tell me I’m the best.” What’s worse is that his father obliged.” Before his win over Grady Brewer two weeks ago, the man simply had not beaten anyone even remotely of note, and when the hype machine tells me to talk up someone completely undeserving, I have a tendency to hit them a lot harder than I’d hit someone who had compiled a record against soft competition but stayed quiet about it. I’ll freely admit when I’m wrong, and I (and Grady Brewer, who may or may not have been alive) laid a big fat egg with my FNF finale prediction.

Lucian Bute is on the Boxing Tribune’s top ten pound-for-pound list largely due to my tireless campaigning for his place there. I have him ranked third behind Pacquiao and Mayweather on my personal top ten list. Did Interbox pay me to put him there? In a word: no. I’ve just watched a fair few of his fights and the guy brings the goods every time. Regular readers of this column know very well why I’m so high on the Romanian—a great knockout percentage and undefeated record compiled in 12-round fights against legitimate opposition, and the fact that I’d bet on Bute if he fought Andre Ward or Carl Froch.

You should see a pattern developing here. I like guys who bring action, power, and an entertaining style into the ring and do it with as little fanfare from everyone else and from themselves as possible. I cover a second-tier fight show for this site and do it with gusto because I think ESPN offers a generally better product than the pay-per-view cards do, especially when the price (free vs. $50 or more a pop) is factored in. I think boxing is fun. What’s more, I think it’s supposed to be fun, and if sanctioning bodies and championship belts went away tomorrow the sport itself would continue to be purely about the entertainment value of it all.

Look at MMA. The reason it looks like surpassing boxing in popularity, at least among anyone who isn’t bald, gray, or both (with my own hair rapidly going the Jean-Luc Picard route I resemble this remark), is largely due to Dana White ruling the sport with an iron fist. His UFC is managed with a buck-stops-here, good-of-the-sport, Kenesaw Mountain Landis in an Ed Hardy shirt authoritarianism that ensures that the best fights between the best fighters headline every single card that is put out there for general consumption, and that individual fight promoters can’t influence the action to their own benefit but to the detriment of the fans.

Contrast that with boxing and…well, you’ve heard it all before. Corrupt judges. Referees like Russell Mora and Marlon Wright who do things even refs in the WWE wouldn’t have the cheek to try and pull. Fighters who would rather vacate a belt than fight a legitimate challenger, and the WBC especially ensuring that if said fighter is Mexican he won’t even have to vacate the belt. Manny Pacquiao and Floyd Mayweather, who if this were UFC would probably have fought a trilogy by now. And people wonder why I’m happier out on the fringes. Those guys still have something to prove. Nobody’s buying a pay-per-view to watch Hank Lundy or John Molina or Chris Arreola or Pawel Wolak-Delvin Rodriguez. To which I say: “Hey, your loss, more free boxing for me.”

We often forget as boxing writers that we’re covering a sport that, when lightning strikes and two guys leave everything they have in that ring, is the most enjoyable spectacle in all of athletic competition. Which for me is the very core of my writer’s bias. Action fighters get positive press. TV-unfriendly fighters with styles that don’t leave fans screaming for blood, even if they’re world champions, don’t. The science is sweet, but bloodlust is sweeter. Now you know where I’m coming from. I’m biased. I’m human. And I’m a fan of all-action fights. If I’m corrupted by anything, it’s simply a love of controlled violence.

Fox Doucette covers Friday Night Fights for The Boxing Tribune. His column, The Southpaw, appears on Thursdays. Fan mail, hate mail, and ignorant insistence that “you’re just saying that to cover your ass, c’mon, who’s really signing your checks?” can be sent to beatcap@gmail.com.