With both fighters bleeding from headbutts, Soto connected with a wicked shot in the second round that had Alfaro out on his feet and stumbling, looking to hold on. After a couple more solid shots from Soto, the referee moved in to call an end to the bout. 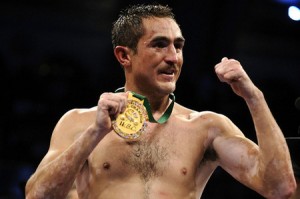 middleweight contender, Marco Antonio Rubio (52-5-1, 45 KOs) had little trouble with Ghana’s Mohammed Akrong (13-4, 10 KOs), stopping his opponent in the fifth round of their scheduled twelve.

Akrong was game and tried to make it a fight, but Rubio was just too strong and skilled. The veteran from Torreon, Coahuila simply walked down his opponent, busted him up to the body and head and dropped him in the fifth round from an accumulation of punches. Akrong would beat the count, but the ref ruled the battered African unable to continue.

Foro Promo Casa, Mexicali, Baja California, Mexico– Omar Chavez (27-0-1, 20 KOs) made quick work of club fighter, Alberto Martinez (15-2, 10 KOs), taking some marginal shots early, but then putting his opponent away at the end of the first round with a short left hook that sent Martinez’s mouth guard flying and Martinez, himself, crumpling to the canvas. Martinez was able to beat the count, but was in no shape to continue.

The Chavez and Paez wins clear the way for the rumored bout between the two second generation welterweights.