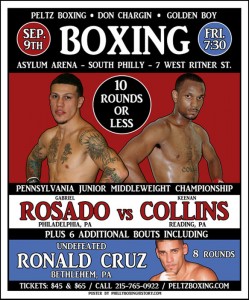 Philadelphia for the PA State Junior Middleweight title. Rosado, who currently holds a Jr. Middleweight  NABA title has lost to Alfredo Angulo and Fernando Guerrero while scoring wins over Kassim Ouma, Latif Mundy, and Ayi Bruce. Rosado is fighting for the first time since being arrested in Atlantic City following an altercation with casino security several hours after his last fight. Charges are currently pending in the case.

In Collins’ two fights of note he lost to Doel Carrasquillo and Fernando Rodriguez.

In the co-headliner welterweight prospect Ronald Cruz 13-0 (10 KO) takes on Christopher Fernandez 19-13-1 (12 KO). Cruz was scheduled to take on Anges Adjaho, who pulled out last week with a hand injury. Cruz has stopped his last six opponents including Jeremy Bryan, Manuel Guzman, and Doel Carrasquillo. Cruz’s camp was looking to make a statement by stopping the sturdy Adjaho, who went the distance with several hard punchers. Fernandez, who often takes fights on short notice, has lost to several top fighters including Devon Alexander, Paulie Malignaggi, and Danny Garcia. Fernandez was available to take the fight on short notice when his scheduled fight on August 27 in Atlantic City, NJ was cancelled due to Hurricane Irene.

Both fights will be televised on Telefutura’s Soleo Boxeo series with coverage beginning at 11:00pm.