If you’re willing to deal with decapitations, public executions on pedestrian bridges, and mountain highways full of cutthroat thugs, there are a lot of advantages to living in Mexico.

I’ve been here for over eleven years now and, despite being caught on a bus hijacked by armed thieves 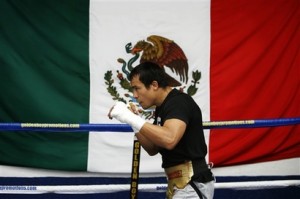 and various other misadventures, I’ve never looked back. Getting as far off the grid as possible is definitely a good thing. Warm weather, beautiful señoritas, and all the boxing talk you can handle– These are the kinds of things that can make a grown man forget about more than 40,000 murders since the opening salvo of the Drug Wars in 2006.

On a typical day, I can head over to the butcher, who will talk my ears off about Julio Cesar Chavez Jr.’s “payasadas” (disgraceful posturing), Juan Manuel Marquez’s skill, or Jorge Arce’s “coraje” (angry courage). From there, I can hail a cab and talk to pretty much any taxista about the fights. One driver is an especially hardcore fan who has the nasty habit of driving out of his way so he can extend our boxing talk. Personally, I don’t mind touring the side streets so I can hear him insist that Erik Morales and Marco Antonio Barrera should retire or pontificate upon how promoters should never match Mexican fighters against one another.

If there happens to be a party over the weekend (and there always is), you can be sure that boxing talk will start up wherever three or more males are chatting. “El Canelo” is a nice, respectful young man caught up in a dirty game, Fernando Montiel is a “real” fighter, and Humberto Soto is playing games with the fans by stalling for a money fight– or so the guys at the party, holding a La Victoria beer, will tell you.

And reverence is always shown for those who have served their time in the world’s toughest sport. Julio Cesar Chavez is the “Father” of Mexican boxing’s Holy Trinity with Ruben Olivares and Ratón Macias assuming their roles as “The Son” and “The Holy Ghost.”

Unlike their American counterparts, there are no cannibalistic tendencies among Mexican fight fans. A Mexican will always support a Mexican, even when the fighter is “mas boca que puño” (More mouth than fist).

There’s no petty nastiness among fight fans. No pundits pushing their own partisan agendas at the expense of the sport. The media actually likes the sport and, for the most part, isn’t tied into the whims of promoters and publicists. Tearing down fighters and pissing on legacies is not part of the Mexican psyche. That kind of stuff is uniquely American and likely the real reason only one single American fighter has any sort of fan base.

I ran a few shows down here in Central Mexico until the drug wars made it impossible to run an honest event and I learned a lifetime’s worth. From promoting to matchmaking to popping the popcorn– It was the kind of hands on experience you can’t get anywhere else.

And we’re talking a real Mexican experience, not a 40-hr excursion, ushered around tourist areas by well-fed locals, then enjoying overnight accommodations at well-protected tourist hotels. I’m talking about honest-to-goodness real boxing shows in the Mexican Badlands where the ring card girls also double as brothel employees at a cartel hangout and the only hotel amenity you’ll find is a moist roll of toilet paper.

The old-school shows start off with a Carambola. In this craziness, kids from the local boxing gym are blindfolded, brought in the ring, and sent to battle until only one remains standing. After the insanity, the fans toss loose change into the ring as a reward and the kids scramble to collect the coins.

Between fights, sad-eyed, voluptuous ring card girls dance and fend off drunken cowboys who reach out for a game of grab-ass as the girls walk by. By the end of the evening, the girls bear the red marks from over three hours of slaps, pinches, and claw-grabs.

In the crowd, bets are made on each fight and brawls are broken up, often because of those same bets. You learn fast here that Mexicans are not good losers. A lucky betting streak at the fights could earn you a gunshot wound.

As the card goes on and as the crowd gets drunker and more drawn into the action, a tension floats over the bull ring or auditorium. Any bad call, bad decision, or pitiful performance could start a full-scale riot. Cans and bottles are banned from most fight venues, but like any law or rule in Mexico, all bets are off once someone decides that they just don’t want to play by the rules.

I’ve been in full-scale riots and worked a bout that had to be called off when one fighter was hit with a can of beer. I’ve also been the cause of a riot, when, as one of two dissenting judges, I refused to give a decision to the hometown fighter. My sister was visiting at ringside at the time and had to hide under the table for cover as anything and everything not nailed down got tossed into the ring. After repeated attempts to talk me into changing my score, the promoter eventually convinced the other judge to change his vote. Then, the “mistake” was announced and the decision was changed to a draw, provoking an angry exchange between me and the promoter where I launched my clipboard at his head while he was trying to get his greasy ass to safety. I would stay an hour after the show, explaining my scorecard to the fans at ringside, despite the hometown fighter’s grandmother trying to knock me upside the head with some sort of metal rod.

This is the Mexico I know. Passionate, often unreasonable, but with no pretense. As Henry Miller wrote in Black Spring: “Always summer and everything true to pattern. If it’s a horse it’s a horse for all time. If it’s apoplexy it’s apoplexy, and not St. Vitus’s Dance…If it be a lip it must be a lip that trembles eternally. For in Mexico, ladies and gentlemen, it’s always high noon and what glows is fuchsia and what’s dead is dead…”

In Mexico, boxing is not a sport– it’s a struggle. Since being introduced to the sport by drunken American and British sailors in the first part of the twentieth century, Mexicans have excelled in el “boxeo” and have practically owned the sport from lightweight on down. The fans have embraced it with the same passion as any of the country’s other obsessions and compulsions. It’s not just because the sport is readily available on free TV, although that does help.

No, it’s because if anybody can appreciate boxing, it’s the Mexican. Boxing is life and death. A sport where even the greatest, most hard-fought ecstasy is likely to end in tragedy at some point. This is life in Mexico– Fight hard, be real, and wait for the blow that will eventually take everything away.