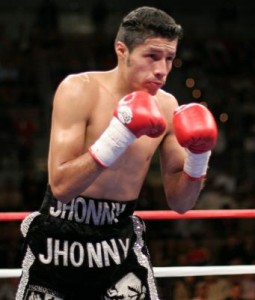 Mtagwa in the main event of an ESPN Deportes televised card.  The event served as an opener to the big fight weekend and prelude to Mexican Independence Day celebration over the weekend.

Gonzalez spent the first minute of the fight feeling out his opponent before going to work.  Mtagwa pressured, as is his style, while Gonzalez moved away firing some counter punches.  Then halfway through the round Gonzalez began countering Mtagwa as he charged in and quickly found success landing heavy shots.

Gonzalez, who lives in Mexico City, Mexico wasted no time in round two, going right after the Philadelphia fighter who was originally from Tanzania.  Gonzalez landed several hard left hooks and straight right hands pushing Mtagwa into a defensive posture.  Gonzalez, who is trained by Hall of Famer Nacho Beristain, landed the double lead left hook combination that is a trademark of Beristain fighters.  He connected first with the left hook to the head that staggered Mtagwa followed by the left hook to the body that had his opponent stunned and motionless with both hands hanging down.  The double left hook was finished off with a right hand that sent Mtagwa spinning.

Mtagwa, being the tough guy that he is remained on his feet but had nothing left.  Gonzalez pursued him into the corner firing a left uppercut and right hook.  By this point referee Guadalupe Garcia had seen enough and stepped in to end the bout.  The official result was a TKO win for Gonzalez at 2:15 of the second round.

Gonzalez 50-7 (44 KO), who was making the second defense of his title he took from Hozumi Hasegawa earlier this year in Japan, was expected to win but the way he won was certainly impressive. By stopping the rugged Mtagwa, who made a name for himself when he took Juan Manuel Lopez to the brink in a losing effort, Gonzalez puts himself into the thick of things in the featherweight division.  Gonzalez would likely be an underdog to the top man in the division Yuriokis Gamboa but he should be considered a worthy challenger to the talented Cuban.  Gonzalez’s power and solid technical skills would make for an interesting challenge to Gamboa’s speed and athleticism.

Mtagwa 27-15-2 (19 KO) has a had a good career where he has gotten the most out of his talent through an aggressive style mixed with tons of heart and toughness.  But he has been stopped early in two of his last three fights including tonight against Gonzalez and previously against Gamboa.  The hardnosed Philly fighter has nothing to be ashamed of and could certainly be proud of his career if he decides to hang up the gloves following tonight’s fight.

On the undercard Antonio Escalante 24-4 (16 KO) scored a TKO at 2:08 of round one over Pipino Cuevas Jr., 13-8 (11 KO).  Escalante landed a left hook to the body and left hook to the head as the fight was called to a halt with Cuevas staggering.