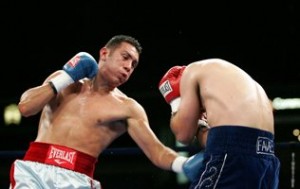 This Saturday form the Fantasy Springs Casino in Indio, CA, former contenders Vincente Escobedo 23-3 (14 KO) and Rocky Juarez 28-8-1 (20 KO) will square off trying to get themselves back into the title mix.  The fight is scheduled for ten rounds in the junior lightweight division and will be televised on Telefutura.

Escobedo, once considered a top prosepct, started his career with nine knockout wins but was then beaten by Daniel Jimenez in a close split decision.  Escobedo rebounded winning twelve in a row to earn a title shot against Australian tough guy Michael Katsidis.  Escobedo was largely dominated by the stronger, more physical Katsidis and lost a split decision that was considered by most a clear victory for Katsidis.  Two fights later, Escobedo got another title shot against Robert Guerrero.  Escobedo was again overmatched losing a unanimous decision and being knocked down twice.

Juarez was a decorated amateur who topped it off with a silver medal in the 2000 Olympic games.  Considering his pedigree, Juarez professional career has not lived up to expectations.  Juarez has fought for a major title six times but has failed to capture the title each time including losses to Humberto Soto, Marco Antonio Barrera (twice), Juan Manuel Marquez, and Chris John (twice against John, one loss and one draw).

Escobedo is coming off a win over Walter Estrada but Juarez has lost his last four bouts including against Jorge Linares and most recently to Alejandro Sanabria.  The fight will provide each man with a chance to put a decent name on the resume and attempt to push his way back into the spotlight for a bigger fight.