Back in 1886, in Scotland, Robert Louis Stevenson wrote the book that would become the template for every split personality story 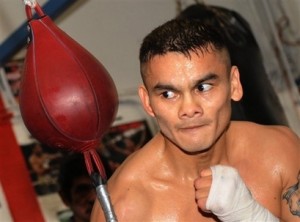 you’ve ever read. In 1983, in Argentina, a child was born whose boxing career would become a Jekyll and Hyde tale in its own right. Marcos Maidana takes on Petr Petrov Friday night in Buenos Aires for the WBA junior welterweight “regular” title made available by Amir Khan’s elevation to “super champion” status after the Zab Judah fight.

Which Maidana will show up Friday? Will it be Dr. Marcos, the hard-hitting power puncher who has knocked out 27 of his 30 victims, including recent Mayweather victim Victor Ortiz? Or will it be Mr. Maidana, who went down once and was deducted a point for low blows en route to a loss to Khan and got more than he probably should have in a narrow majority decision win over Erik Morales?

Dr. Marcos is quite possibly the single most dangerous power puncher in the sport not named Vitali Klitschko. He throws heavy shots with bad intentions and he throws a lot of them (in his split decision loss to Andriy Kotelnyk, Maidana threw over a hundred punches a round for a twelve-round fight.) His punches to the face of Victor Ortiz had more in common with Sweeney Todd than with the Sweet Science, turning “Vicious” Victor’s face into the handiwork of a butcher. Similar grotesquery was on display in the Morales fight, as the Mexican looked like Maidana had beaten him with a baseball bat by the time the fight was over.

Yet for all that power from Dr. Marcos, Mr. Maidana shows serious structural flaws. With all due respect to Erik Morales, he is a shadow of the fighter he once was—requiring 10 rounds and a lot more effort than necessary to get rid of a club fighter in Pablo Cesar Cano was ample proof of that. A young, hungry would-be champion at 140 pounds should be able to do a lot more than Maidana was able to do in that fight. In addition, Maidana has an extremely suspect chin—Victor Ortiz put him down three times in their fight and was ahead on all three judges’ scorecards when the end came due to the cut. Amir Khan was also able to drop Maidana early—indeed, if there are any takeaways from the Argentine’s toughest fights, it’s that an opponent who can get to him early and go for the KO in the first few rounds might have his best shot winning that way.

For a guy with tremendous power, strong heart, and the ability to come off the floor and win, you’d think that he would be a far more complete fighter than he is. But Marcos Maidana leaves holes in his defense, he often looks shockingly pedestrian against elite or even slightly sub-elite competition, and with the exception of bogus “interim title” belts, he has suffered his two pro losses when fighting for a world title (first against Kotelnyk and then against Khan for the WBA strap.) This is not to say that Petr Petrov is going to stop Maidana—indeed, Petrov has fought all but one of his fights in Spain against club fighters (and the sole exception was a loss in Germany to the only real prospect Petrov has ever fought.) This upcoming contest has sanctioning-body sham written all over it, and Marcos Maidana will be an overwhelming favorite to capture his first world title belt through decidedly underhanded means.

But what of the Jekyll and Hyde case then? Sooner or later the man will have to defend his belt against a legitimate opponent, and what will happen when Dr. Marcos and Mr. Maidana step into that ring? We’re not going to learn anything Friday. But when the Timothy Bradleys and Amir Khans of the world come calling, or even when a guy like Lamont Peterson or Zab Judah or Kendall Holt shows up, it remains to be seen whether Marcos Maidana can find the magic potion necessary to transform the suspect-chinned, technically-unsound puncher into that devastating knockout machine before the time runs out on the story and he becomes permanently consigned to oblivion.

Fox Doucette covers Friday Night Fights for The Boxing Tribune. His weekly column, The Southpaw, appears on Thursdays. Find him on Twitter @RealFoxD. Fan mail, hate mail, and debates over the comparative merits of Treasure Island vs. Strange Case of Dr. Jekyll and Mr. Hyde can be sent to beatcap@gmail.com.