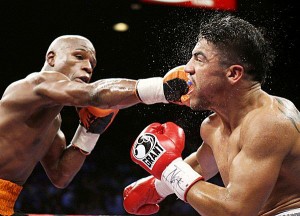 After all was said and done Saturday night in Las Vegas, Floyd Mayweather left the ring the new WBC welterweight champion, arguably once again the best p4p fighter in the world and the proud recipient of a paycheck that will range somewhere in the tens of millions of dollars.  On top of all his formal accolades, Floyd Mayweather also secured a mythical title for himself; the baddest man on the planet.

That designation, most recognizably assigned to former undisputed heavyweight champion Mike Tyson, is about being the toughest, meanest, most ruthless prizefighter in existence.  The B.M.O.P. is not only the last guy you want to meet in the ring, he’s also the last guy you want to see walking towards you in a dark alley, the worst person to piss off.  While Mayweather has always been a great fighter, he has in the past been criticized for being too technical, too cold, not having enough killer instinct or fire.  You will never again hear this criticism by anybody in boxing worth their salt.

To rewind for those who may have been living under a rock the past few days, Floyd Mayweather was dominating Victor Ortiz in performance that for him was fairly typical.  Ortiz was scoring one punch for every three he took, and the swelling on his face was illustrating that Floyd was also landing the harder shots.  Then in the fourth round, things got… well not so typical.  After a brief flurry in which Ortiz landed a couple punches and then missed with several more, the young champion let frustration get the best of him and busted Mayweather’s lip open with one of the more brutal and intentional head butts you will ever see in a legitimate prizefight.  Ortiz, seemingly instantly realizing his error, tried desperately to apologize to Mayweather, even going so far as to kiss him on the cheek.

Floyd chose not to accept that apology.

A split second after referee Joe Cortez called for the action to resume; Ortiz approached Mayweather with his hands down, seeming to once again try to apologize.  Floyd cracked him on the jaw with a quick left hook.  The next half a second or so seemed to go in slow motion.  Ortiz, presumably feeling he had been fouled (he had not, the blow was legal) looked to Cortez to complain about the punch.  Cortez, who had appeared to miss the first punch because he was checking with the timekeeper to see if the round was about to end, looked back at him with a priceless expression that seemed to say something to the effect of “What are you looking at me for!?  I can’t save you…”  Floyd, seeing that his opponent had become distracted at a crucial moment and wearing an absolutely devilish look on his face, starched Ortiz with a wicked right hand.

As the stunned pro-Ortiz crowd looked on in amazement and horror, Ortiz struggled to try and get up.  Mayweather was leering at him from a neutral corner, his body language daring Ortiz to stand as if he was desperate for further revenge.  When Cortez finished his ten-count, Mayweather’s rage subsided and he calmly walked to his corner in victory.  The rest of us were left to try and make sense of what had just happened.

On one hand, Mayweather had lost his trademark composure and deliberately taken advantage of the situation in a way that was perhaps not 100% sportsmanlike.  On the other hand, he did what any professional athlete owes it to their fans to do, which is absolutely everything within their power (and the rules of the game) to win.

Some have compared this to Mike Tyson’s brutal attempts to break opponent’s arms and bite off their ears.  In the sense of pure ruthlessness, the cold-hearted assassin mentality it takes to attempt to hurt somebody in that way, they are correct.  However, Floyd makes an even better villain than “Iron” Mike, because he found a way to do it legally, and get away with it.

Fans loved to hate Tyson, but at the end of the day, even though they despised what he did to Holyfield in the “bite fight,” they at least got to say that he lost.  It may have been a dissatisfying DQ victory for Evander, but it was a victory.

Fans rooting for Ortiz had absolutely no silver lining, and were left with no options other than shock and rage.  Their man had been coldly and callously knocked out by a sucker punch, and the guy that hit him got his hand raised in victory.

For Floyd’s image, and ultimately his popularity and drawing power, a better script for this fight could not have been written.  The criticisms that his “bad boy” image was all talk and wasn’t demonstrated by equal tenacity in the ring no longer hold water.  He badly wanted to hurt Ortiz for that head butt, and he made sure it happened.

For Mayweather fans, it was the ultimate victory.  “Win at all costs” is a great mantra for a guy that bases his legacy on being undefeated.  If somebody is putting their money on Floyd, they want to know damn well that he is going to do absolutely whatever it takes to win the fight, on Saturday he proved that beyond any doubt.

For Mayweather haters, it was the ultimate slap in the face.  His total disregard for entertaining fans or putting on a show in the ring was demonstrated as well as it has ever been.  If you go to a fight hoping Floyd loses and it doesn’t happen, you would like to at least see him win in a gracious and sportsmanlike manner.  If you are hoping for this, I imagine Mayweather would tell you to keep dreaming.

Some have desperately tried to attack Mayweather’s actions as “bad for the sport” seemingly running out of ways to criticize him and beginning to spout off things that simply don’t make sense.  Something that draws this much attention to boxing (the KO was the top story on the home page of many major non-sports based news websites) is nothing but great for boxing.  Sure fans were booing the result; they didn’t want Floyd to win.  You can bet they will be back at the next fight booing even harder, and next time they may convince their friends to show up and express their hatred as well.

Anybody familiar with boxing history will be quick to let you know that the most controversial fighters have always been the ones that draw the most eyes to the sport, and right now Mayweather is that man.  Those who say that Manny Pacquiao is the main draw in boxing have completely missed the point, which is that a huge amount of Pacquiao’s appeal is that he is a guy fans hope can beat Mayweather.  In the way that there would have been no beloved Gerry Cooney without the hated Larry Holmes, there wouldn’t be half the love for Manny if it wasn’t for Floyd.

Like in pro wrestling, in boxing the heels drive the show.  The bad guys are the ones that make everything work.  If you still are skeptical, think about the Pacquiao-Mosley fight earlier in the year.  Two nice guys touching gloves and fighting in a friendly manner is, frankly, boring as all get out.  If you can find someone that watched that match more than once, pat them on the back, they are in rare company.  Mayweather-Ortiz on the other hand is still exploding in the media, being discussed on sports television and twitter as we speak days later.

The bottom line is that whatever you think of Floyd’s actions in this fight or in general, he is not only good for boxing, but in many ways carrying the mainstream American consciousness about the sport on his back.  Without Mayweather, the current landscape of boxing popularity in the United States is much darker indeed.  Anyone who continues to hate him does so a bit tongue in cheek, knowing that their hatred for him is part of what fuels their passion for the sport.