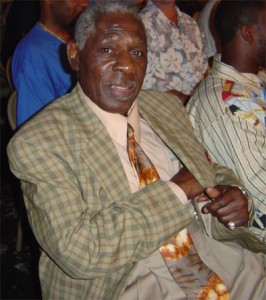 This past Monday, at the age of seventy eight, former middleweight contender and Hall of Fame trainer George Benton passed away at St. Joseph’s Hospital in Philadelphia.  Benton was known as one of the best fighters ever to never get a title shot.  He was also known as one of the greatest trainers the sport ever saw.  The titles and praise that were kept from him as a fighter were earned later on as a trainer.

As a fighter, Benton was known as a defensive master.  Not that he was a runner or boring fighter that goes along with the term defensive.  The best way to sum up Benton as a fighter is to use his own words.

“I never ran.  I was right in front of those guys.  I made them miss and I made them pay.”

Jesse Smith who lost a decision to Benton in the early 60’s said “he just sets there and waits for you to do something, and when you do, you’re sorry you did.”

Benton 62-13-1 (36 KO) never got a chance to fight for a title but it was not for lack of talent or effort.  It was a well-known fact that Benton was an avoided fighter.  Famous Philadelphia and Hall of Fame Promoter Russell Peltz explained that George’s loyalty to promoter Herman Diamond, who refused to do business with mob people that had power over the sport in the 1960’s kept him away from a title shot.  Peltz stated “the middleweight title changed hands twenty two times during Benton’s twenty one-year career and he never got a shot.”

Benton’s fighting career was cut short in 1970 when he was shot with a bullet meant for someone else.  After two years Benton returned to the ring, this time training fighters instead of wearing the gloves.

As a trainer he found the titles and achievements that eluded him as a fighter.  He was known as the Professor, the Mayor of North Philadelphia, and many other names.  One of his first assignments was assisting Eddie Futch with Joe Frazier.  He then took on Benny Briscoe who had beaten Benton earlier in their careers.  Benton helped Briscoe find late career success including another title shot.

Benton would go on to work with Main Event Promotions run by Lou Duva.  Ironically, Duva was one of the same people that years before was responsible for keeping George away from a title shot.  Duva even told this to Benton while George was training Main Events fighters.

In his time as a trainer Benton taught some of the best boxers of the generation.  He passed on his craft to many, including champions Meldrick Taylor, Leon Spinks, Evander Holyfield, and Pernell Whitaker.  Watch old tapes of Benton fighting and then watch Pernell Whitaker’s defensive brilliance.  Watching Whitaker is like watching Benton with a modern flare.

Benton was rewarded for his efforts as a trainer winning the BWAA Award for trainer of the year in 1989 and 1990.  In 2001 he was inducted into the International Boxing Hall of Fame as a trainer.

Unfortunately I never had the opportunity to meet George Benton which is something I will surely regret as a boxing fan/writer in Philadelphia.  I have worked with many who have met him, including trainers, fighters, promoters, and other writers.  When they speak of Benton, it is always with the highest praise for his boxing skills, knowledge, and his character as a person

I had the opportunity to speak with a Benton disciple; trainer Roger Bloodworth at Tomasz Adamek’s training camp last year.  I asked Bloodworth about his time he spent learning the fine arts of training fighters under Benton.  Bloodworth lit up and began telling me tales of George and imitating his voice.  It was clear that Bloodworth took a great deal of knowledge from Benton on boxing but his relationship with “Georgie”, as he called him was about much more than just boxing.

Another Benton disciple, Philadelphia trainer Freddy Marratto learned the art of training fighters for years under George Benton.  He developed a strong bond with George while receiving lessons in boxing and life.  His account below gives a small window into that relationship between trainer and student so I will leave with Freddy’s comments that can do more justice for George than this writers rambling.

“My experience with Georgie Benton was a true gift. A gift packaged with tutoring, wisdom, and guidance. One moment we would be going over ways of countering a left hook, in the next frame the importance of maintaining balance whether in the ring or walking down the street, then you’d get advice on how to ‘stay sharp’ which meant dressing acceptably and matching clothes to keeping your hair cut, every two weeks if it grew that fast and also don’t forget to wear that hat and coat (it was hard for a guy from California to wear a hat come winter time)…finally Georgie got his way. It was just so much more than boxing with Georgie, we ate meals together, laughed and watched TV, strolled around the neighborhood, we were close and had a special bond. It was all encompassing with George and everything included a lesson, so from the ring to the pavement or anywhere in between, I believe Georgie was making sure we had our bases covered.  Thanks for the memories Georgie, may you rest in peace, I’m going to miss you dearly.”