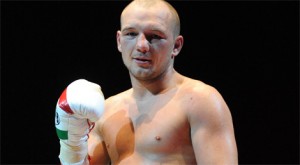 Matthews is a former participant of the Prizefighter tournament. He reached the finals of the Prizefighter Super Featherweight tournament in 2010, and was knocked out by Gary Buckland in the 2nd round. Since the tournament, Matthews’ level of competition has left much to be desired. After defeating Scott Lawton to win a vacant minor title (IBO), his next 3 opponents had a combined 37 fights coming into their respective bouts with Matthews.

Gavin Rees held the WBA jr. welterweight world title for a short spell, dating back to his July 2007 victory over Souleymane M’baye. After losing the title to Andriy Kotelnik in his first defense, Rees took a tuneup bout against a 2-36 fighter before entering the Prizefighter Lightweight Tournament. He beat Ted Bami and Jason Cook en route to taking the tournament crown via unanimous decision victory over Colin Lynes in December 2009. Rees outpointed Ireland’s Andy Murray to win the vacant European lightweight title in June. Rees is hoping a win will help his world rankings and propel him to a second world title shot.